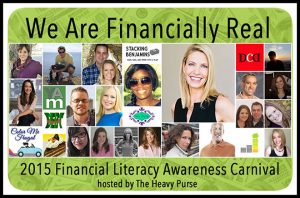 I’m pleased to be participating in the Financial Literacy Awareness Carnival today, which is hosted by one of my favourite personal finance bloggers, Shannan Ryan from The Heavy Purse.

The theme of this year’s carnival is about getting “Financially Real” and so I wanted to share with you my thoughts on when we got real about our finances.

In case you’re new to this blog, my husband and I used to be in a LOT of credit card and loan debt. We’re now finally debt free after 15 long years of struggling to pay it all off. Once we put our mind to achieving the goal of debt freedom, we managed to succeed in just 22 months.

There were many factors that contributed to us becoming debt free. We worked hard, saved hard and kept the end prize in sight. We were focused on paying off debt and a few months into our journey, we knew that we wouldn’t stop doing what we were doing until those debts had GONE.

The reason we did those things was because slowly, over quite a long period of time, we woke up to the realisation that money wasn’t to be played with. We learned that money was something to be taken seriously – something that if not handled with care, could lead us way too far down the road to financial ruin (we were more than halfway there as it was).

On the other hand, it became clear to us that if handled carefully and nurtured, some money (and no debt) could lead to much better things. I’m not talking about yachts and mansions here. I’m talking about freedom.

Such as the impact that debt freedom and a little savings could have on our lives in general, such as being able to make choices about where and how often we work (and what we actually do to earn a living) and being able to do more of the things we enjoy without worrying about how we’re going to pay the bills. Not to mention being able to retire comfortably.

Paying our finances some R.E.S.P.E.C.T.

For a long time, we thought of money as just numbers. Whether we were in the red or the black (usually the red), money didn’t hold much value to us. If we wanted something that we couldn’t afford in cash, we just bought it on credit. Take the time when we bought our first home together… we had no deposit saved, so we arranged a 100% mortgage to finance it. Before we’d even moved in, we’d purchased sofas, a bed, a table, white goods, a new TV, vacuum cleaner, bedding, curtains and unfortunately, much more, on credit.

It honestly was like money wasn’t real to us. Credit seemed normal. We really lived the YOLO mentality to the extreme. We didn’t worry about the debts because we could be hit by a bus tomorrow, right? Then what? (Side note: we later learned that your debts don’t die with you!)

Eventually, we hit rock bottom with our finances and if you want find out what happened, head over to our debt story page. It was bound to happen looking back, because although we stopped spending like crazy, life events happened that had a detrimental impact on our overall finances. And the damage caused by years of disrespecting money had already been done.

The good thing about hitting rock bottom is that you can’t really make things worse. In our case, the only way was up. We couldn’t get any more credit because we ended up in a debt management plan. We had no money because everything we had spare was going to our creditors.

So we began to learn that money did mean something after all! We realised that it was incredibly important for basic survival where bills need to be paid and food must be put on the table. The sofas, new TV, curtains and furniture that we’d spent hours selecting and that we’d funded with credit, suddenly didn’t seem so great after all.

And that’s when we finally started paying our finances a little respect. We began to budget, plan and use what little money we had more wisely. We used it to service our debts and now we’re nurturing it so that we’ll have total freedom in the future. We already feel very much free.

Have you become financially real? If so, I’d love to hear how it happened in the comments below! Please support the 2015 Financial Literacy Awareness Carnival by sharing this post on Pinterest, Twitter or Facebook! 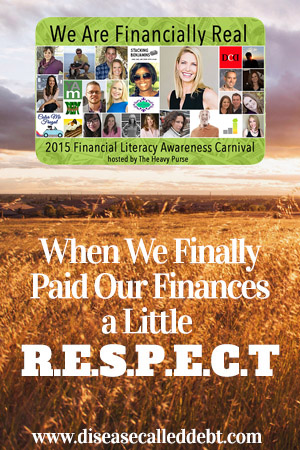