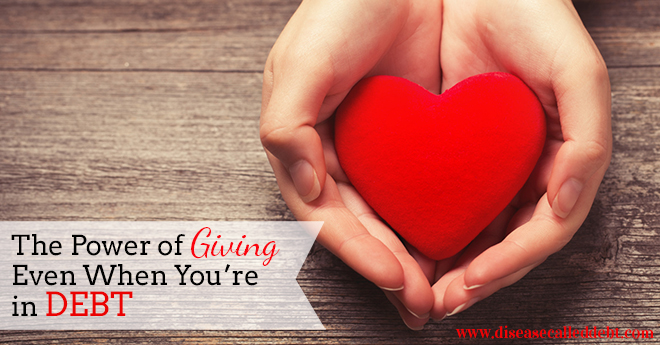 I have an interesting guest post for you today about whether you should give money away to charities or church when you’re in debt. This is from Becky who blogs over at Frame to Freedom. Please check out her blog after you’ve read her post below!

Should you give money to charity if you are trying to pay off debt? This is a question that many people ask themselves when they sit down to create their budget.

It is an important question when you first sit down to talk about where your money will go. Should you be giving money away to charities you love while you are trying to pay off your debt?

• 94 percent are willing to sacrifice personal spending (on new clothing, coffee or a meal out) to support a charitable cause.
• 90 percent said they would give to charity if they won a million dollars.
• 52 percent said that the economic downturn had no impact on their charitable giving.

If you are a church goer, you probably have heard that you are supposed to be tithing 10% of your income to the church. I have seen others give their money to charities and not the church directly depending on spiritual beliefs.

In most marriages, especially during hard financial times, you will most likely see a spouse on both sides of the fence in regards to giving money to charity. One spouse wants to give as much as possible and the other spouse wants to give just a small amount or not at all until the debt is gone. Which one is right?

I think it really depends on where you are at in your finances.

• When going over your budget, consider how much money you have leftover each month. If you don’t have anything, don’t give anything. In this case, it is ok to donate your time. Start a side hustle or sell some belongings to the get the ball rolling towards debt payoff. When you have some money leftover each month, revisit the charity topic.

• Consider donating your time to a charity you believe in. I know I mentioned this above, but time is very precious. If you can donate some of your time to an organization that feeds your soul, this is just as important as giving away money in my mind.

• Do not give a bunch of money away if you can’t afford it. Give your money away intentionally and really be deliberate on how much you think you could afford before just giving it away. Make sure it is a realistic number. When you are debt free, you can give more money away.

Our discussion regarding giving money to charity/church

When we sat down to talk about our budget for the first time, my husband was in the frame of mind that we should not be giving away money at all until we were out of debt. I was on the opposite side of the fence on this.

We finally decided to look at what we had left in the budget and give a certain percentage of that money away each month. That number even seemed a little small to me at first.

In the last year and a half, my husband took a position as a board member for a local charity and has been on the board of directors for upcoming projects. It is a homeless shelter for men in our area and we have felt so blessed to be part of this organization.

We feel like we are really making a difference in the lives of people around us because we can actually physically see changes being made in our community through this charity.

We are donating our time to this charity and we donate our money twice a year because we fully believe in the mission and values they instate to local men in our community.

In December of last year, we were able to give $500 to the charity and in April 2016 we gave them another $300. This is more than we ever thought we would be able to give during our debt payoff process.

We also donate some of our money to Compassion International in which we sponsor two children who live in poverty. One child is in Guatemala and the other in Mexico. We pay a fee every month to support their educational and healthcare needs.

So why do I feel so strongly about giving money away while in debt?

I feel that we are such a small piece of this world and even if we could only donate a small amount to those less fortunate, it shows where our hearts are. It is a powerful thing to be able to help others in need and I fully believe that favor has been given back to us.

Over this past year and a half, there have been times when we have been hit with some pretty tough financial situations, but it seems like in each case, money seemed to come from unexpected places to help us pay for what we needed. It almost seems like since we are helping others, the favor has been extended during our tough times.

We have made donating to charity a priority and I feel that this has made us stronger in our faith and as a couple because now we both see that there is such power in helping others in need.

We have given more money away this year to charities and we have still been able to pay off a large amount of debt. We made giving to others a priority and I fully believe that we are now spending our money the way we are supposed to.

Could we have paid off more of our debt instead of giving to these charities? Maybe. I am not sure we would have been as financially blessed though. I feel that we have been given the gift of changing our finances around because we have prioritized giving in our budget.

In my opinion, if you have something left in the budget after paying bills, you should be giving a small percentage of this to a church or charity.

If you read our story, you’ll know that we started our debt free journey in 2014. In 17 months, we paid off $78,000 of debt through very hard work and determination. In this time, we actually gave more away to our church and charities than we ever have before.

Giving money away to charities and causes you believe in should be (in my opinion) a priority even if you are in debt. It doesn’t matter how much you give whether it is a small financial contribution or volunteering your time, just be happy to provide and give to others.

What is your opinion on giving to a church or charity when you are trying to pay off debt?

Author bio: Becky is a wife, mom of two little boys and personal finance blogger at Frame to Freedom. She shares how her family are working towards being intentional with their finances, including how they are getting out of debt and investing in real estate over at her blog. You can connect with Becky on Twitter, Facebook and Pinterest. 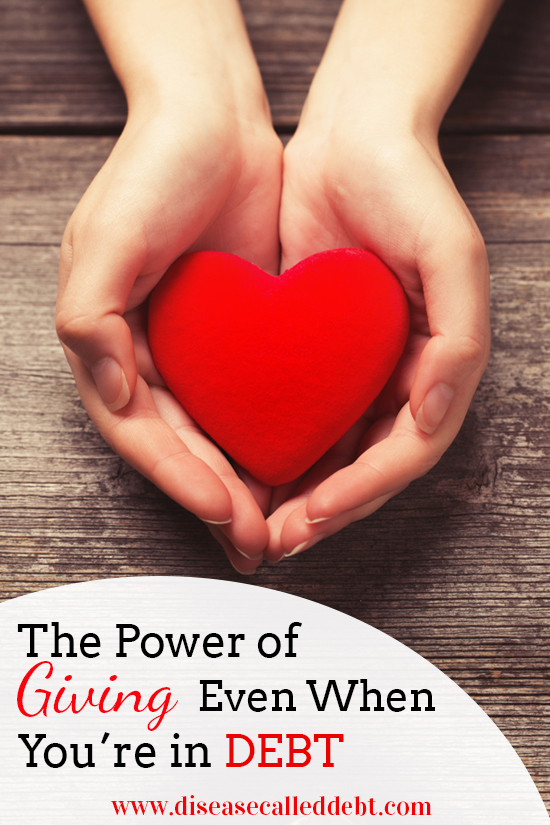