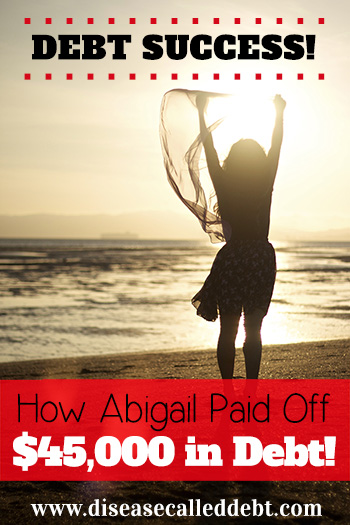 Paying off debt is difficult for most people whichever way you look at it.

But what about if you had a ton of debt to pay off AND significant health problems which prevent you from working? In this situation, how would you even pay regular bills, let alone debt?

Staying motivated, keeping on track and working really hard to get rid of debt requires a lot of dedication and commitment to stay the course and see things through. This was especially the case for Abigail who blogs over at I Pick Up Pennies.

Abigail’s had her fair share of health problems, ever since she was diagnosed with a rare neurological disease that nearly killed her at age 19. She now suffers from chronic fatigue and depression. If that wasn’t enough to contend with, Abigail’s husband suffers from his own set of health concerns, with the treatment for some of his conditions costing thousands of dollars in medical bills.

Yet despite the odds, Abigail and her husband have successfully eliminated their combined debts and managed to get their finances back on an even keel. Abigail shares her story in this interview below.

Q1: What was your debt total at its highest and how did it come about?

This one’s hard to answer because we kept using our cards as our emergency fund. If that sounds horrible, understand this:

By the time I started my blog in 2008, I was on disability, and my husband, Tim, was on unemployment. We knew exactly how much we’d get and exactly how long we’d get it. Meanwhile, we had double-digit interest. Given the banks’ interest at that time, it didn’t make sense to create an emergency fund. Plus our health problems were constantly creating unforeseen expenses. We would have been borrowing from it every month, which means we would have been constantly funneling money back into it rather than at our debt.

Then there were a ton of miscellaneous medical-related expenses along the way. I think it’s safe to say we paid off at least $45,000 over four years.

Oh, that was never a question for me. Tim, on the other hand, assumed he’d never get rid of it. His health problems kept him from holding a job for more than a few months. And he was a spendthrift while he had money in hand.

I showed him that we could and would pay it off. Once he finally started believing that, he was pretty excited.

Health-related expenses were the biggest issue. After Tim got fired, we had to pay for his high-risk insurance, which was $500 a month. That and our $700 rent took up 1/3 of our income.

Then there were the few months where Tim was receiving medical therapy twice a week with co-pays each time. Plus the visits each time he got a MRSA boil, and we literally lost count of how many that was. I know it happened at least 30 times in three years, but I suspect it was more.

There were other expenses that we didn’t think about, like when steroid medications made him gain weight. He had to go up a pant size three different times. Even by shopping in outlet stores, we paid around $150 each time. On our budget, that was a huge deal.

Our health problems also mean that we eat a lot of convenience food. Sometimes, we have to pay a little more for items because I don’t have the energy to go to multiple stores to compare prices. (I do as much shopping online as possible to avoid those scenarios.)

Finally (but still notably) there’s my husband’s severe ADHD. Impulse control is not his strong suit. He’s gotten much better over time, but it’s taken ages for him to really get that he couldn’t buy every little thing. And when you have $1,800 left after rent and insurance, “little” is the operative word. We had fights because he kept buying Slurpies on his way back from the doctor.

Q4: How did you stay motivated in order keep going with your debt repayments?

Honestly, I never considered the possibility of giving up. I was raised to learn that if you have debt, you pay it off. I wasn’t sure when we’d succeed, but it literally never crossed my mind to stop paying or to declare bankruptcy.

That’s not to say that I was cheerful in the face of it all. I’m a depressive. I often felt lost and hopeless. There were times when I felt so overwhelmed that I’d literally hide under the covers. It sounds silly, but I felt safer there. And whatever works, right?

So I’d cry to get all the “this is so unfair” out. Then I’d get up and deal with it.

Before meeting Tim, I had been waiting for my disability application to be approved. I had been living on almost no money, and even once it was approved, it was $700. So I was used to living close to the bone.

Tim had to make a lot of adjustments though. For example, he couldn’t spend almost anything on his hobby, Magic the Gathering. The game cycles out a whole set of cards (around 300) each year. But the biggest change was taming his impulses. Not an easy feat for someone with ADHD. He had to realize that even small purchases add up. Hence the Slurpie arguments.

He also had to stop asking me if we could afford X, Y and Z. He didn’t know what we could afford, so he’d ask whenever he saw something. As you can imagine, this made him a holy terror at the mall, wanting almost everything he laid eyes on.

I finally told him that having to constantly say no made me feel like his mom. I told him to only ask about the stuff he really, really wanted. Then we would discuss it (and I would still usually say no).

I had some old savings bonds I had forgotten about, so I cashed those in for about $1,200. I also still had some American Girl dolls from when I was a kid. Turns out they were now considered collectible and were worth a decent amount. That came to about $2,000.

Tim’s dad loaned him about $4,000 to pay off one loan. We paid back about $600 before Tim lost his job, at which point we had to stop. (Once we were financially stable, we bought a house earlier than planned because my inlaws were about to be homeless – they now live in our guest house. So I call it even.)

My mom lent us $6,000 to help with Tim’s oral surgery bill. We were paying her back, but she forgave around $4,500 as a wedding present. The rest was just about allocating money very carefully. We were able to slowly chip away at it. Towards the end, I was finally able to find a job I could do full-time from home, so the last $3,000 went very quickly.

It’s the peace of mind in the face of unexpected expenses. I no longer worry about how much it’ll set back our repayment. Instead, I’m just bummed that it lowers our savings account balance. Having the money when you need it is pretty darn spectacular.

For example, I totted up our unexpected expenses last year — from installing insulation, medical bills, home repairs and even needing a new car — and it was about $17,000. Suddenly, I felt a lot better about our relatively low bank balance. But the point is that we had the money. And this year’s $7,500 in home repair didn’t need to be financed.

Unfortunately, we will go into debt again toward the end of the year. Tim’s dental implants will be $25,000. We currently have $11,300. We’re on a major campaign to save, but even under optimal conditions, we won’t have all the money in time.

We’ll take out a medical loan at 0%, and we should be able to pay it off no later than February or March. Sooner if we end up getting bonuses again this year. .

People will tell you not to get discouraged, but that’s silly. There are constant financial setbacks and wrinkles – even for healthy people with good jobs. So of course you’ll get discouraged. What matters is making sure that you don’t let it freeze you into inaction.

Go ahead and be bummed, freak out, rant on your blog/to friends/at the clouds in the sky. Whatever it is that makes you feel better. Accept that things suck, life is unfair and you have every right to be upset about it. Then shake it off as best you can, and go work around it.

Huge thanks to Abigail for sharing her story here. Don’t forget to check out Abigail’s blog over at I Pick Up Pennies and you can also connect with her on Twitter. If you’d like to share your debt success story, I’d love to hear from you – please get in touch! 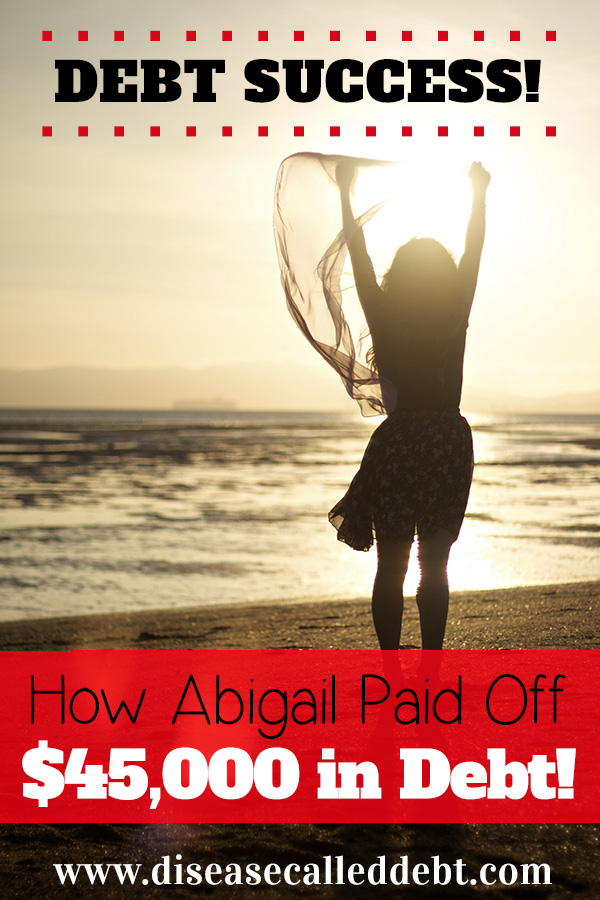