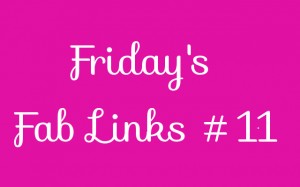 Happy Friday! Hope your week has been good? Mine’s been good, although it’s been a funny old week for our brand spanking new budget I have to say. I’ve been tracking our spending down to the penny and am already amazed that we’ve had to go to the shop four times because we forgetting certain groceries! But we’re not spending anything out of the ordinary yet which is great.

We’ve had some costs crop up this week though that we weren’t expecting. Our dog has a sore leg!! We took him straight to the vets yesterday when we noticed him limping and they confirmed that luckily it isn’t broken but looks like he’s twisted it. One consultation and some painkillers later and the budget has been hit with £40. Secondly, the gas fire in our old home which we’re renting out has packed up, so we need to repair this – not sure how much it will be yet!

I think I’ll have to take the gas fire bill out of the emergency fund but we’ve covered the vet bill out of the usual budget because our fund for emergencies is dwindling each month at the moment. It will mean £40 less for debt repayment, however, I’m not going to worry too much yet as I’m on the case with earning some kind of extra income this month. I don’t know what that will be yet, but I’m damned sure there will be some!

I’ve not had lots of time this week to read as many blogs as I’d like, as I’ve been trying to dedicate more time to writing which I really love doing especially just to clear my head. But I hope to catch up on more wonderful blogs this weekend!

Shannon from The Heavy Purse wrote about Phrases to Avoid when Talking about Money with Kids. Looking at this helpful post, I can see I’ve made a few mistakes with using the right language and phrases around money with my own daughter – hopefully no lasting damage though! Talking about money positively can really help influence your child to make the right decisions around finances when they grow up.

Girl Meets Debt posted her End of September 2013 Debt Repayment Update! She has done so well and has now cleared her consumer debt of $12,000 completely! Congratulations to GMD on her nomination as a finalist in the Plutus Awards for Best Debt-Focused Personal Finance Blog.

Budgeting in the Fun Stuff posted a great guest article from Lyle at The Joy of Simple on How Being A Credit Card Delinquent Saved Me Thousands Of Dollars. Lyle’s story of how he paid back his debt and turned his finances and lifestyle around is really inspirational. He has some really good advice for those people looking to stop spending on credit cards.

Steve from The Silver Maple Leaf wrote a great post on What Rabbit Do You Chase? Steve writes about the definition of success and how in our society, the way we perceive success is often warped.

Laurie over at The Frugal Farmer wrote Are You Afraid To Be Debt Free? Laurie explains some of the reasons people fear their debt and struggle to get out of it. I’ve definitely been in at least one of these situations before. Laurie has some good advice for tackling those issues and helping you to face up to your debt.

I hope you enjoy these reads as much as I did! Have a lovely weekend all. 🙂