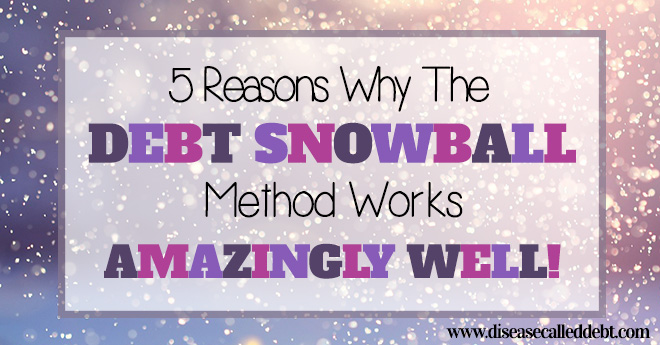 If you’re in debt, you might think that the best way to pay it off is to tackle the highest interest debt first. It does make logical financial sense because overall there would be less interest to pay, saving money in the long run.

However… there’s a massive downside to this method of debt repayment – it could be quite some time before you see any of your debts completely eliminated.

The fact that you might have to wait for a while to see some progress then presents the very real risk of you wanting to give up, planting you firmly back at square one again. I’ve experienced this myself several times whilst battling with debt over the course of 15 years.

I tried desperately to pay off debt, throwing any spare money I had at my debt with the highest rate of interest for a few months, only to undo all the good work I’d done when I gave in to an impulse buy or when an unexpected bill cropped up. The consequences of giving in triggered a cycle of emotional spending. I felt bad that I failed, so I thought I might as well go all in and fail even more.

I ended up continuing to spend on credit for a few months and then trying again to tackle the highest interest debt first when I came to my senses again. The trouble was, I’d be in the same amount of debt as when I tried to eliminate it months before – sometimes the debt was even higher at that point!

For me, paying off the highest interest debt first JUST. DID. NOT. WORK. What did work (and worked well) was the debt snowball method, made famous by Dave Ramsey

How does the debt snowball method work?

You know how a snowball starts off very small but gets bigger when you keep rolling it along in the snow? It builds momentum and turns into a giant snow boulder, right? Well that’s how the debt snowball method works too.

You start off by listing down all your debts by the smallest to largest and basically you pay off the smallest debt first. So for example if you have a loan at £8000, a credit card at £2500, car finance at £3700 and you owe some money to a friend for £300, you’d pay your debts off in the following order:

When using the debt snowball method to pay off debt, you simply forget about interest rates completely. You just pay off your lowest debt with any spare money that you can find (whilst making the minimum payments on all your other debts).

When your smallest debt has been eliminated, you’ll no longer need to make a minimum payment on that debt. So instead, you use the money that you were putting towards that particular debt along with any spare money you have to put towards the second smallest debt, until that one is also paid off. All the while, you’ll be continuing to make minimum payments on your other debts.

You’ll continue to eliminate your debts in this way, using the money that you’re saving by clearing debts as you go along, to pay off your other debts. Eventually, you’ll have just one debt left – the largest one and all your money will go towards that one until it’s cleared.

You’ll then be debt free. Go right ahead and do a victory dance like Chandler…

Why is the debt snowball method so… well, quite frankly, fantastic?

I’ve explained how the debt snowball method works but now I’m going to tell you WHY it works! And why it worked so much better than paying off the highest interest debt first for us.

If you really want to get out of debt, you’ll want to get out of debt quickly I’m sure. One great benefit of the debt snowball method is that you can start putting a dent in your debt pretty fast as small debts can be eliminated much more quickly than large debts. Your debt will decrease before you know it, as you blow each debt out of the water!

2. You’ll have more disposable income in a short space of time

By eliminating the smallest debt first, that’s one debt completely gone. No longer will you have to service that debt. Even though you’ll be using the money that you were originally paying on that debt to work towards your other debts, the bottom line is that you’ll have more free cash in your bank each month. That’s more of your money that won’t be lining your creditor’s pockets. When the second smallest debt is gone, you’ll have even more disposable income.

3. You’ll be SO motivated to carry on paying off debt

There’s nothing better than seeing a debt get eliminated. No more worrying about that debt, no more bills from that creditor, it will just be gone. The emotional feeling you’ll get when you finally get rid of just one debt will spur you on to keep going so that soon, your next smallest debt will be gone. Forever!

4. Your financial behaviours and mindset will gradually start to change

As you pay off debt, you’ll see in a shift in the way you think about and view money. The bitter taste that debt leaves you with will start to wear off as you regain control of your finances and start kicking that debt to the kerb!

5. If you give up, you’ll have already made progress!

Paying off debt is hard, no matter which method you choose to eliminate it, however with the debt snowball method, you’ll be making progress very quickly at first. So if you give up and go on a spending spree, the damage caused emotionally won’t be half as bad as if you were trying to pay off the highest interest debt first.

That’s because you’ll probably have already cleared at least one debt! You’ll have a good chance of getting back on the road to debt repayment quickly because of the progress you’ll have already made.

Will the debt snowball method work for everyone?

If your largest debt also happens to be the one with the largest interest rate, then the debt snowball method of eliminating debt may not be right for you. But it really depends on how you’re coping with your debt and how much willpower you have to actually get your debt paid off.

If you can’t see the wood for the trees when it comes to your debt (like how I used to be), then I’d recommend trying the debt snowball method. The psychological effects of getting fast results really does help. Just getting rid of one debt is such an amazing feeling!

For further reading on getting out of debt, check out these resources:

What are your thoughts on the debt snowball method?

*Affiliate links are contained in this post. Disease Called Debt is a participant in the Amazon Services LLC Associates Program, an affiliate advertising program designed to provide a means for sites to earn advertising fees by advertising and linking to amazon.com. 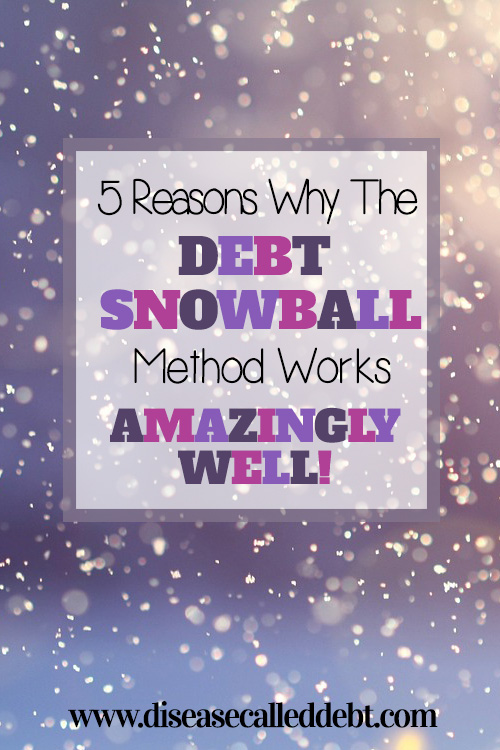