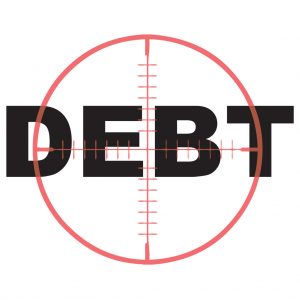 My hubby is probably the biggest supporter of this blog, not least because he sincerely believes in what we’re trying to do in becoming debt free.

Yet although I run most of my post topics past him to get his input (and also to extract ideas from him!), he rarely reads the posts once they’re published.

In fact, my hubby doesn’t read any debt blogs, websites or articles about debt at all. This is because he hates reading about debt.

Why does my hubby hate reading about debt?

The fact of the matter is that reading, talking or just thinking about debt makes my hubby cringe. He remembers the mistakes he’s made around money and he can’t help but recall the impact debt had on us at its worst. Scary conversations with creditors spring to his mind along with the sacrifices we’ve had to make in order to get out of debt, not to mention the psychological effects that debt carries.

I know where he’s coming from. It’s easier to try to forget about it and because we’re heading in the right direction now financially, my hubby would simply rather not be reminded too much of the bad times we’ve experienced at the hands of debt.

I’m the opposite although this hasn’t always been the case. Nowadays, I read, think and talk about debt issues to arm myself with the knowledge I need to make sure this never ever happens to us again. I don’t mind because in my head I’ve already won the battle and conquered it. We’re not in the clear yet but I know that we will be!

So my hubby and I had a conversation about the blog and debt in general the other day. One of my goals for this blog is to reach people that really need help with debt and inspire them to do something about their debt situation. In relation to this, the hubby said something that really stood out for me:

“It’s all well and good telling people that they should face up to their debt and stop ignoring it – it’s easy to say that – but there are people out there who really don’t want to know about this stuff. Some people avoid reading, talking or even thinking about debt in general. They are in denial. You won’t be able to reach them until they get to a crisis point where they are faced with not being able to pay back their debt – just like we did. When that happens they will look for help.”

This struck a chord with me because I think that my hubby is right. There are people out there who are oblivious to the damage that their debts are causing but they won’t do anything about it until they absolutely have to. We know all too well how this situation occurs because it happened to us.

So I guess in regard to those people in debt who can’t be reached, when the time is right for them, they’ll look for the information and support they need in order to help themselves get out of debt. In the meantime, I’ll keep plugging away at this blog in case they ever happen upon it!

On a serious note, if this is the first time you’ve come across this blog and you’re really worried about your debts, please know that you’re not alone – there are many other people out there with debt problems. Please ask for help if you need it. If you don’t know where to start, you can always drop me an email. 🙂