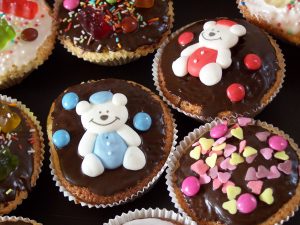 I’ve been researching cheap birthday party ideas for kids for a while now! My beautiful little girl will be 3 years old in September and she is already talking about her upcoming birthday.

She’s really excited! It’s the first time she’s really been aware of her birthday happening. Last year I think she was a bit bewildered by all the people coming and going and the fuss we all made of her.

That celebration set us back around £200 (over $300) with all the food, drink, presents etc. Yes, a fortune just for a 2 hour party – and it was at our home! This year, since we’ve had our lightbulb moment about paying off debts, we’re saving every penny and trying to raise our income. We can’t really afford much for our little girl’s birthday this time as bad as it sounds. But in reality it’s not all that bad because I’m sure that even when we can afford more in the future, I will still want to get the best deals on everything and get value for money!

However, I don’t want my baby to miss out on having a fantastic time. I know she’ll get spoiled rotten by family and friends so I don’t feel too terrible about not being able to buy her many presents. Plus she’s not at the age yet where she’s asking for things that her friends have thankfully although I’m sure this will come in time. But I really want to make sure she has a brilliant birthday party as this is what she’ll remember. I just need to do it on the cheap! I’m sure it is possible especially as I’ve just read this story online where someone planned a cheap birthday party for their child for only £20!

Last year, the party was at our home and it still managed to be really expensive. Thinking about it, we catered for the adults as well as the kids, so this didn’t help the budget. Then there were lots of decorations, party games, party bags, invites and other bits and bobs. But I still struggle to see how it all added up. We didn’t have a party entertainer or anything like that as these can be really expensive just on their own! I guess the costs just escalated as we didn’t really have a budget in mind.

Anyway, this year I’m planning my little girl’s party plenty of time in advance so that I have time to shop around.

Here are my initial thoughts on cheap birthday party ideas for kids:

Save money on birthday party invites

Last year I bought some cheap invites and posted them all out. I don’t know why but my mum loves receiving stuff through the post and I sort of feel the same way! But given that a second class postage stamp is 50p, we ended up spending £15 just on postage alone. This year, I’m going to send out the invites by email and there will be no cost attached.

Hold the party at home

We could hire out the local village hall or hold the party at a soft play centre but this would just add to our budget. At another venue even though some of them include party food, we’re talking a per head cost of around £7-8 per child so if there’s 10 children, that’s £70 – £80 already. So we’re still going to use our home as the venue even though it will mean a lot of clearing up afterwards. It will be free, so that’s great.

Last year we had a Peppa Pig theme (tablecloth, plates, invites, balloons, cake, wrapping paper, the list goes on). Expensive! For this party, I’m considering a fancy dress theme and asking that all the children come dressed up in their favourite fancy dress costume. Or maybe a pink theme and asking everyone to wear pink… Pink is the little lady’s favourite colour at the moment.

Cater for the kids only

I’m definitely only going to cater for the kids this year. If we hold the party at 1.30pm, then it will be scheduled strategically for after lunch and before dinner so the chances are we won’t have to worry about providing too much food. I’m not sure what route to go down here, what do you think would work best out of the following options in relation to a birthday party for kids?

Make the birthday cake rather than buying one

A vital part of party planning! I’m going to make one myself – I’m not an expert so it may have to be birthday cup cakes instead! Doing this should mean the cost for cake will be around £5.

Well, there will be children coming who are various ages up to 10 years old so we could do some traditional entertainment such as musical chairs, pin the tail on the donkey, blind mans bluff and pass the parcel. Although, with blind mans bluff, I do remember crying at my 7th birthday party because I couldn’t find anyone when it was my turn to be blindfolded. Maybe not that game.

These are all pretty cheap options. I also have a friend who is just brilliant at face painting, so I’ll be bribing her to come along. And the hubby’s a dab hand at balloon modelling. Sorted then?

Probably, but I’m also considering the following by way of entertainment:

We have a really small garden so I think garden games are pretty much out of the question. I’m racking my brains to think of other creative options!

I have in the past filled these up with totally crap goodie bag toys – those useless plastic noise makers for example. Not only are they tacky, they usually break within 3 seconds of a child playing with them.

I think I’m going to stick with birthday cake, a few sweets and because my little girl is really into books at the moment, I’m going to buy some low cost books and then each child can take one home with them. There’s a shop near to where I live where you can buy new children’s books for just £1. Bargain!

I made the mistake of not really making a realistic budget last year but now I’m going to allow myself to spend £40 ($61) on the party and do everything I can to stick to this figure! We live frugally day to day anyway and I’m determined that my baby will have an amazing time and not be aware that it didn’t cost much money at all.

If you can think of any other ideas as to how I can plan a cheap birthday party for my little girl, let me know!