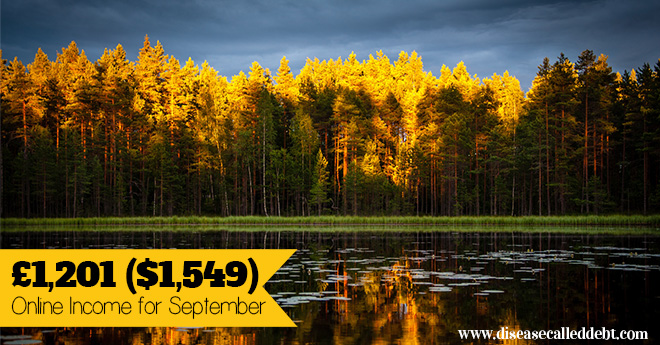 Well, when it comes to achieving income goals, you could say that September proved to be an epic fail in this department. I earned £765 less than last month and £899 less than my target for September! As much as I really didn’t want to post about my failure, I thought I probably should because I said I would post an update… even if I failed…

This is the downside of freelancing and earning a variable income. Sometimes, things just don’t go to plan! With that said, I’ve earned enough so that we don’t need to worry about bills and enough to put some away for savings. But why did I fail?

Well, the blog didn’t do so well this month in terms of advertising revenue. It’s just how things go sometimes. Then, I just didn’t have the energy to go about earning extra income! With the change of seasons came plenty of bugs and viruses and I ending up developing a nasty chest infection, which later turned into pneumonia.

I didn’t realise I had that until I found I was struggling to get out of bed in the morning. After I discovered that I was actually pretty ill, I just took things easy for the rest of the month! I managed to get the freelancing jobs done that I was already committed to, but I felt like someone had just pressed my slow motion button during September. The good news is that I’m on the mend, ready for what October has in store!

Here’s the breakdown of my September earnings:

Work in this area went really well during September despite me being sick for a few weeks. Last month I earned around 40% of my income via Upwork (a freelancing platform). This month my income from Upwork increased to make up 61% of my freelancing income. Not bad!

If you haven’t tried Upwork for freelance jobs yet, I’d really recommend doing so. Check out my post on How to Significantly Boost Your Income with Upwork formerly oDesk) to get started.

Yep. Not good. I made a little money from Google Adsense during September and some from affiliate promotion across two of my blogs, but I’m not declaring it just yet as I didn’t actually get a payout in September. With my illness and general lack of energy, I didn’t manage to get around to approaching potential advertisers this month.

On the plus side, I won a blogger award for Disease Called Debt in the SHO-MOs (like a smaller UK version of FinCon, where bloggers are recognised for the work that they do via their blogs). I won Money Blogger of the Year jointly with Skint Dad! Yay!

Not quite as much as last month but considering that I didn’t do much during September to earn money from this particular stream, it’s definitely a nice to have.

My goal in this area last month was to write another ebook, publish it and promote it. FAIL! I have actually started writing another eBook but am nowhere near finishing it just yet!

*Earnings subject to some tax deductions!

My income target for October is lower than the target I set for September, but it’s probably more realistic to aim for this amount as opposed to £2,000 plus.

Now over to you! How was September for you in terms of your personal goals? 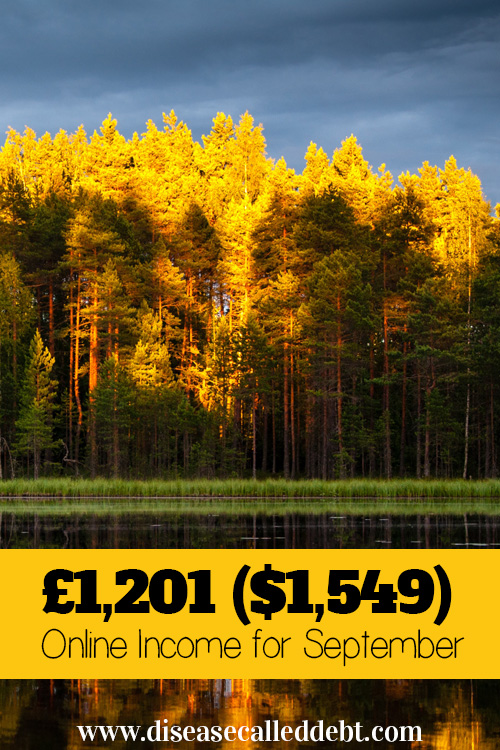