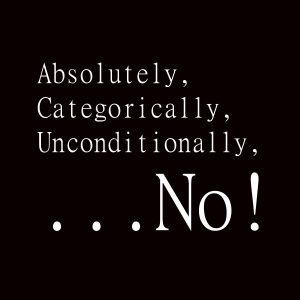 Have you ever tried to help someone but ended up making yourself unhappy in the process because you can’t just say no? Or wanted to challenge a situation that you’re not happy about, but find you can’t for whatever reason?

This has happened to me in all sorts of different areas of my life. It’s not that I don’t want to be helpful but sometimes I’ve made a rod for my own back as I’ve gotten myself into various situations where I can’t just say no.

Soon after starting my last job, I found out that a co-worker in my team lived a few streets away from me. She used to catch the bus and every so often would drive to work as she and her hubby had one car between them. One day, she asked me for a lift home because her hubby had the car and it was raining.

Of course, I said yes! I wanted to get to know my co-worker anyway and as she only lived a few streets away, it’s not like I was going too far out of my way. That night I dropped her off and arrived home around 10 minutes later than usual.

The next day, my co-worker asked me for a lift again. I didn’t mind too much, it was only the second time and I wanted to help her. It was quite nice to have company again on the way home from work. A few days after that, she asked me to give her a lift in the morning to work. What I didn’t anticipate was all the traffic in the morning, which was much worse than the evening for some reason. When I said that she lived a few streets away, did I mention that one of the streets was a main road? Turns out it was chocca block full with commuter traffic every morning!

Warning bells began to ring but because I felt like I couldn’t say no (after all this co-worker was a really nice person) this went on for around 5 months! Morning and evening, at least 3 times per week! I realised that I was actually leaving for work 20 minutes earlier than I should have done. I don’t know about you but in the morning, every extra minute asleep is precious!

I ended up in a situation where I was making someone else happy but not myself. But could I tell my co-worker about this? Nope! I ended up making excuses such as having to go somewhere else straight from work or having an early appointment on the way to work. After a while, she gave up asking! Terrible I know! But as I hate conflict, I just couldn’t bring myself to be assertive.

Another example is where I’ve taken on extra workload as a favour to other co-workers. When my boss saw that I could take on this extra work and do my own work at the same time, she frequently asked me to do other work related jobs which were outside of my job description. I couldn’t just say no, not to my boss. The plus side was that I was deemed to be a highly efficient employee. But I felt like an overloaded and undervalued doormat!

Not saying no when you need to can cause resentment and frustration!

There were situations which used to wind me up considerably such as the birthday gift fund where I used to work. I used to part with my cash at least 3 times per month to contribute to the numerous birthday gifts for colleagues. I don’t mind giving to friends and family but in all honesty, I didn’t really know John from Finance that well at all. He could have been the one that sang at last year’s Christmas party. It started to really bug me, particularly as I couldn’t really afford to contribute to the birthday gift fund every couple of weeks. But could I be assertive and just say no? Of course not! 🙁

I’ve actually lost substantially more money because of my frequent inability to just say no. A good friend of mine invited me on her hen weekend a few years back. At the time, with it being a good 6 months away, I said that I’d love to. But as the time drew nearer and the hen weekend costs started to add up with all sorts of activities being planned left, right and centre, I found I couldn’t back out for worrying about letting down my friend. There were a few others who dropped out of the hen do because of escalating costs and I knew how disappointing this was for my friend. The result was that I ended up paying for some of the costs for the hen do on my credit card (shakes head) just because I wanted to avoid upsetting my friend.

So I’ve been thinking… what do happy and successful people do in these situations?

When you think about people that are successful or happy in their careers, in relationships, with money… do they have trouble being assertive? I doubt it somehow. The leaders in any organisation do a great deal of delegating and not too much ‘work’ as such, so by the very nature of a leadership role, it pays to be assertive and know when to say no.

People who are financially savvy seem to have no trouble handling money matters. They tend to be able to negotiate discounts, ask for their money back and just say no to things that they think are too expensive (such as hen weekends that they really can’t afford to go on).

There is a difference between being a nice helpful person and being a complete doormat. I’ve realised over the last few years that making other people happy doesn’t always result in my happiness. It’s hard to change who I am as a person but lately, I have been saying no to more situations including work related issues and also in my relationships with friends. Not only am I slightly better off financially but I’m also happier in myself!

Do you find it hard to just say no? Or are you easily able to challenge situations that you’re not happy with?