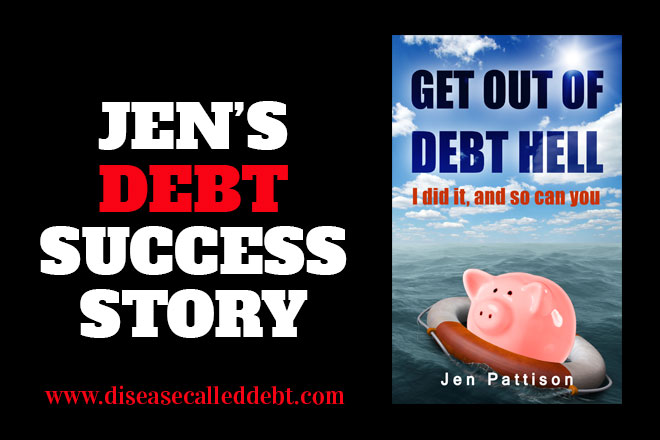 This is a guest post from Jen Pattison, who is sharing her personal experience of debt – and info on her new book with you today.

“How could I have been so stupid?”

That was my overwhelming thought a few months ago when I started to write down and piece together my experiences with debt and how I was forced into a debt solution to deal with a total debt of £48,000. Writing helped me to figure out how the seeds of a massive debt problem spanning about 25 years were sown in my early years.

My teenage years were awkward. I was the stereotypical misfit – introverted, rather tactless and mildly depressed. After college I got a good job and I had a wage that meant that I could buy whatever I wanted! How powerful that made me feel to buy anything on a whim and when there were times that it was a bit too expensive, I had my credit cards to hand.

It was a downward spiral though. I ended up paying only the minimum payments most of the time, I never stayed the course in my attempts to clear my debts and I would consolidate debts with a loan but not readjust my spending patterns. I married in my early twenties, but we both loved the good life and neither of us applied a firm brake on our excesses.

By the start of the millennium I was enthralled with the idea of ‘living my dream’. At that time I had a good middle management job but heck, it was so boring. We decided to have a big downsize and live out in the countryside, sell the house we owned and rent instead. Rents were much more affordable back then and I had no idea that, ten years later, renting would be a lot more expensive.

I started a degree course, but going from a middle management salary to a student loan income was a difficult transition and I never got to grips with curbing my spending. Both of us ended up with low-paid jobs and our debts were rising again.

What tipped us over the edge was my beloved mother’s terminal illness. I had a great deal of expense to visit her as often as I could; I thought at the time “it’s only money” and that spending as much time as I could with my mum was much more important in her last months. After mum’s death I took stock of our finances and we were absolutely broke; we owed £48,000 and we could no longer meet even the minimum repayments.

We entered into an IVA, which seemed like a punishment at the time and we were faced with a long slog of five years to complete it. Having to account for all your expenditure felt like being back at school in the naughty corner with Teacher watching over you all the time. It’s hard at first to rein in your expenditure dramatically, but you do get used to it and it becomes second nature. Looking back, it was the financial education that we needed.

Our IVA ended two years ago and did we start spending like crazy? Absolutely not! We always live to our means now as we have experienced the dark hell of being trapped in debt. We haven’t applied for any credit since and don’t have an overdraft.

What worries me for the future is that we came off the housing ladder and I don’t want the bulk of our pensions to be spent on property rent and leave us in poverty. I may have ‘lived for the moment’ in the past, but no more; our future security is my overwhelming concern.

No matter how low a budget I have to stick to, I plan to own a modest home again by the time we reach state pension age. Reaching retirement age always felt to be way into the distant future, but when you reach your half-century it starts to loom very large.

Since our recovery from debt hell, I have started to think a lot more deeply about the problem of debt that plagues Britain and other countries too. People are overspending, but why? What resources are out there? How can we as a society turn the problem around? I feel passionate about helping others to escape from debt hell and that gave me the idea for the book.

Why is my book different?

There are many excellent books out there on the ‘nuts and bolts’ of debt solutions and budgeting. Some also offer good advice on the emotional difficulty of debt and overspending habits.

You will find those nuts and bolts in my book with debt solution advice and ways to save money. In addition, I look at the influences in society and culture that have led to burgeoning debt, as it is difficult to address your emotional responses if you don’t have a clear idea of what led you to them in the first place.

Advertising, celebrity culture, peer pressure and emotion over reason all conspire to induce you to overspend; once you understand how this works, it is easier to switch off from it. I hope that this will help you to think more deeply about these perspectives and to develop your own ideas and thoughts.

Take that first step to debt freedom – you will never regret it!

Look out for massive discounts on my ebook!

Click here: Get Out of Debt Hell on UK Amazon

Find it here: Get Out of Debt Hell on US Amazon

Author bio: I am a debt survivor writing under the pen name of Jen Pattison. I would have preferred to write under my real name in order to reduce the stigma of debt, but some people close to me objected and I decided to respect their wishes. I have been married for many years and we pulled through debt hell together. We are taking some time out by housesitting (no household bills!), taking a breather after many stressful years in the public sector, retraining soon for a new career and writing. I will be working on my second book in the autumn, also about money and spending. Connect with me on Twitter, Facebook or over on my blog.

*Affiliate links are contained in this post. Disease Called Debt is a participant in the Amazon Services LLC Associates Program, an affiliate advertising program designed to provide a means for sites to earn advertising fees by advertising and linking to amazon.com. 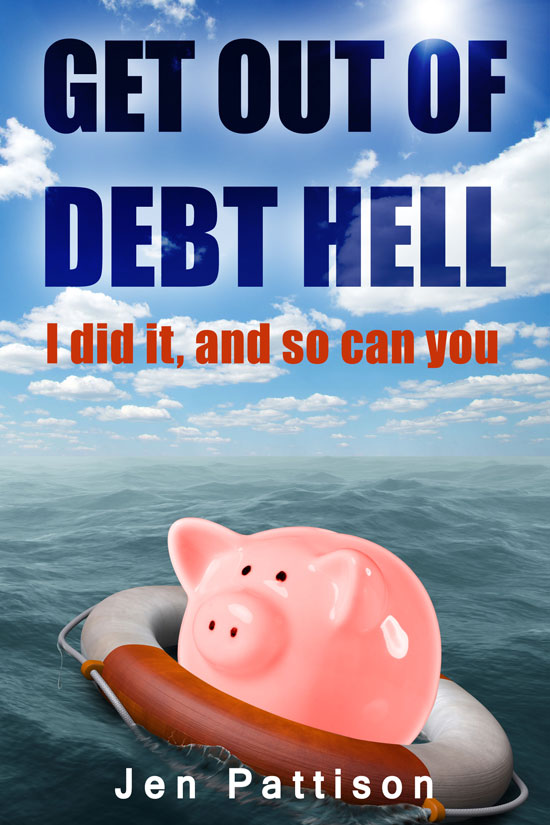