The following is a guest post from Lyle at The Joy of Simple who has an inspiring perspective on finances and life in general! Please feel free to ask Lyle any questions in the comments section below. If you’re interested in guest posting on A Disease Called Debt, please contact me. I’ll be back tomorrow with Friday’s Fab Links! 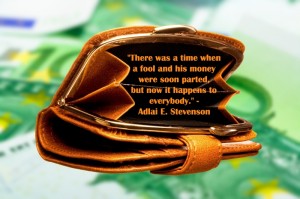 Okay…so you are in debt crisis mode and have decided to seriously pinch pennies and diminish unwanted expenses as a means to kick your debt in the butt and onto the street to be run over by a huge Mack truck. All good so far? Let’s hope so…but here’s the rub…how is your tight-fisted strangle-hold on your spending going to affect your social life or home life? More importantly though, are your friends and family the reason why you are in debt!?

Whether you live alone, are a bachelor like me, a single parent, or are married with children (Al and Peggy Bundy anyone!?), your wanting to finally take control of your debt, while admirable, will surely have an impact on both friends and family. And while your paring down is for a good cause long term, it is the short term where things can get a tad sticky, especially if your spending habits have, up to this point, been overly generous and frivolous.

Back in my 9 to 5 days I was a regular bon vivant and used to spend lots of money on friends since I was the only one who seemed to have any cashola (ie: a credit card). Restaurants, movies, pinball arcades and taxis everywhere was how I rolled!

Now I didn’t throw my money around because I wanted to show off or make a big splash amongst my group of friends, it’s just that if I wanted to do things that cost money with my friends, I was the one who would always end up paying.

However, as the years went by and my lifestyle changed – especially when I began my first year at University – there was very little, if any money on my part to enjoy the “good life”, or to share with others. All of a sudden when I would get invited out to a movie or dinner, I had to qualify my wanting to go with a “sure, but I can only pay for me.” While this wasn’t an issue all the time, there were more than a few times where I could sense disappointment, which would then be followed up by a “uhh…okay, maybe another time then.”

Now, at that time I couldn’t blame my friends because it was I who got them used to having a “free ride”. And even to this day I don’t regret the countless thousands I had spent over the years. But when I began to take control of my spending habits, I noticed that there were a few friends that began to hang out with me less and less. I began to wonder if my downward spending curve was to blame and that if I wasn’t so intent on saving money and paying off my credit cards, if we would all still be living the life of Riley on my dime? Definitely not a nice way to find out who your true friends are and who aren’t!

I’ve seen the same scenario happen with families as well.

About seven years ago I became very good friends with a married couple who had five young children ranging from age 6 to 12. As he was a successful screenwriter, their lifestyle was what one would expect: big house, private school education for the children, summer and winter vacations abroad, plenty of gadgets, expensive clothes and toys for the kids, you know, the usual success trappings.

As I got to know the family better, I became privy to more personal matters, which revolved mostly around their financial issues.

Truth be told, they were up to their eyeballs in practically every kind of debt you can imagine. Succinctly put, they were living WAYYYY beyond their means. Each month became harder and harder to manage as they tried to stay afloat and it eventually became clear that they had to do something extreme in order to start climbing out from beneath the avalanche of debt that was suffocating them.

After many discussions with their young ones and with each other, they decided to sell the house and move into a rental. And even though this move would have given them the leg up that they needed to clear all the debt, there was lots of resistance from the children, and on occasion, each other. They decided however to go ahead with the plan and within a few months, the house was sold, all their debt was paid off and they settled into a nice, but just as big a house as the previous one.

This time though, they were just renting so there was no mortgage to worry about. No property taxes to worry about and no maintenance concerns. However, their rent was quite expensive given the neighborhood they lived in, and as my friends’ writing gigs diminished – the nature of the business – it didn’t take long before they were once again being crushed by credit card debt.

At the beginning of what was supposed to be their new streamlined life, the husband wanted to downsize, make a budget, send the kids to public schools, cut out the unnecessary from their lives and stay somewhat on track. His wife however had different plans, living and spending like she always had (I’m not judging btw!). The children kept on attending private schools while sporting the latest iPhones, laptops and whatever else they wanted. Eventually the husband gave up trying and two years later, they were in worse shape than they had ever been in, with the huge difference this time of not having a house that could help bail them out!

Eventually, they had no choice but to enroll their children into public schools while slashing a lot of daily and monthly expenses from their financial lives, but it was too late. Their “new” lifestyle not only began to create huge rifts between husband and wife, but sadly, between children and parents. The children continuously wanted what they were accustomed to, what they pretty much had their entire lives, while their parents would argue between themselves on how best to provide for their family with each having their own perspective on what they were willing to cut out or not.

A year or so later, my friends decided to separate and they each moved into rented spaces that were finally matched with their respective incomes while dividing up the children amicably. And while I love their children as if they were my own, I’m surprised that they still complain about not being able to have what they want given what their parents went through personally and as a family.

To be honest, who really knows if the marriage would have sustained itself had they both been on the same page about cutting back and reducing their debt? There’s possibly more here than just not following a budget or sending the kids off to public school.

That being said, and as I mentioned earlier, I do not judge how they each handled their financial affairs, but I wonder if, at the very beginning, if they had both chosen to live well within their means, if they would still be together. Sadly, I’ll never know.

So…how, if at all, has debt affected your friends or family members, immediate or otherwise?

As a single male, my financial actions, whether good or not so good, pretty much only affect me now. But I can only imagine if I was in a committed relationship, how we would each have to be on the same debt reduction page if it was going to work as harmoniously as I, or we, would like.

After all, when both partners are on-board, there should be no problem…theoretically!

But what happens when one is trying to cut costs and save in order to pay off debt, while the other is spending up a storm – even if the purchases “benefit” the family – like a new TV or convenient, “must-have” appliance?

What happens when you’ve been the life of the party but are now considered Scrooge-like because you want to save your money instead of spending it on gratuitous activities with your chums?

Well, hopefully nothing if you have good friends who can understand and accept your decision to be money conscious. Chances are though there will be a few individuals who will feel let down and possibly feel more than a tad resentful of your decision to focus on your debt rather than on their fun. You yourself may feel a tad resentful that you’re always the one expected to pick up the tab.

So, what can one do to avoid such “drama”?

The obvious answer would be to not get yourself into such situations in the first place!!

However, while this may be relatively easy to do with friends, it’s harder to do with a spouse and children since there’s usually a tendency to not want to say “NO!” when the little ones want something or when you are both just starting out on your first home and you want it to feel and look “homey” (IKEA anyone!?) .

A possible solution would be to have “the talk” before you both say “I do!” If one of you has medium to massive debt prior to the marriage, this would be a definite red flag that needs addressing in my book. After all, if you can’t, won’t or are too uncomfortable talking about personal finances prior to a life commitment, what else will you be sweeping under the rug!? As they say in a court of law, ignorance is no excuse!

As I wrap this up, I am reminded how grateful and fortunate I am to not have debt issues. As I reminisce about my lavish past, I am very happy that I embraced a simple living lifestyle. This has allowed me to live life on my terms and a huge part of that has been as a result of my choosing to live below my means. If I kept on spending for all and being the life of the party, I’d most likely be a way different person than I am now. Thankfully, the party ended a long time ago. Sorry guys and gals, you’re all just going to have to buy your own Nachos from now on 🙂

Take care and all the best.

Author Bio: Lyle is a self-employed guitar teacher, performer, web-designer and blogger. For the past twenty years, he has adopted the tenets of voluntary simplicity to live a thrift shop life and has recently begun blogging with these concepts in mind at The Joy of Simple.

*Image courtesy of Lyle at The Joy of Simple and stockvault.net