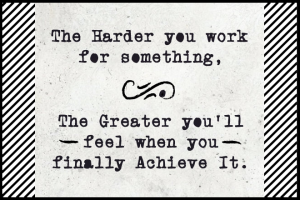 Today, I wanted to share something that’s really helped us to achieve debt freedom and it’s something that could help you achieve success in your life too, even if your main goals aren’t related to paying off debt.

Now before you get too excited, I need to let you know it’s something you’ll have heard of before (but you may not be using this little gem as much as you could).

I’m talking about effort. Because without a shadow of a doubt, achievement and success all depend on the amount of hard work and effort you’re prepared to put in to see results.

“It is only through labor and painful effort, by grim energy and resolute courage, that we move on to better things.” – Theodore Roosevelt

Take paying off debt for example. To do this, it involves a serious amount of effort without reward – and not just once in a while – continuous effort without reward is what’s needed to get to that finish line. Cutting back on expenses every month, trying to save money and earn even more money is difficult to do time and time again. It’s even a massive effort to just not give up on the idea of debt freedom. Yet continuous effort combined with the magic of time is how you will definitely succeed! This is how we managed to clear our debts. If we had stopped putting the effort in somewhere along the line, we’d still be in debt now.

“Continuous effort – not strength or intelligence – is the key to unlocking our potential.” – Winston Churchill

I’m a big believer in taking small steps forward and never stopping to look back. I’m working towards some goals right now and each one requires action and effort from me. If I do nothing about these goals, then quite simply nothing will get done! One of these goals is to develop a hefty pot of savings for a house deposit. To achieve this goal, we need to be saving on average £1,300 per month which is an incredible amount of money to even think about saving (for us at least)!

So this the kind of goal I chip away at. I put effort in every day to try to work towards this goal – I work really hard on my freelance jobs and try to earn as much money as I can. I weigh up carefully every purchasing decision I have to make to see if I can avoid spending. Slowly, ever so slowly, the savings are adding up! (I’ll post an update on that soon).

To put 100% effort into something requires enthusiasm for the task in hand of course. You have to want something so badly that you’ll do what it takes.

How much effort are you putting in to achieve your goals right now?

*Image courtesy of Flickr and modified by Disease Called Debt.