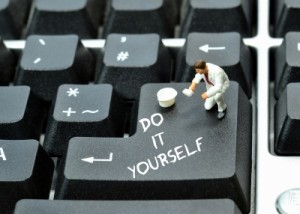 All too often it seems these days, things break. If items are still under warranty, like my beloved GHD hair straighteners were when they packed in, then you should be able to get it fixed for free or even a nice shiny new replacement sent out to you.

But what if the warranty has expired on your broken item? Or perhaps it didn’t have a warranty in the first place?

Older cars for example break down frequently and we ship them off to our local car garage and later find ourselves faced with a much higher bill than we’d hoped. Unless you’re in the ‘know’, it’s not that easy to fix your car yourself!

However, there are some items where you can save money by fixing them yourself.

Get crafty (and savvy)

I’ve lost count of the number of pairs of shoes I’ve thrown away because the heels got damaged or the soles have been worn. But I could have taken them to be reheeled or resoled instead of buying new ones each time! These days, I head to my local Cobbler before parting with cash for a new pair.

Brush up on your DIY skills

Some people like DIY and some people don’t. Some people are great at it… and some people aren’t! But either way, it’s well worth learning how to use a screwdriver. It can save you many a penny when hinges on doors come loose, a shelf falls down or even when you need to take furniture apart for shifting. If you can fix your home furnishings or small home maintenance jobs yourself, then you don’t need to worry about paying a handyman to do it for you.

Remember, though, for bigger fixes, it might be a good idea to hire a professional. For example, if you don’t have the tools or the expertise to perform a large-scale home maintenance project, hiring a local contractor like DePalma Roofing could be worth the cost in the long run. With a professional contractor, you can guarantee that the job will be done right the first time and you won’t have to spend time and money on costly mistakes down the road.

With mobile phone companies tying us into longer contracts these days, it’s no wonder mobile phones eventually break. Both the hubby and I are tied into a 2 year contract – aside from the tie in period, we got the contract on a good deal because it’s fairly cheap each month and the provider gave us a free Blackberry phone at the start of the contract. Great!

We’re about 18 months into our 2 year contract and gradually our phones are starting to have little niggles. For example the battery in both phones go flat almost instantly without warning.They soon charge up again but we have to charge them each day now. It’s annoying but manageable. 🙂

The hubby had a major problem with the trackpad on his Blackberry a couple of weeks ago. The trackpad had some sort of fault so the screen just kept scrolling around and he couldn’t select anything. So he phoned our provider to see if he could upgrade early for free if we stayed with them. He was told that in order to upgrade early, he’d have to buy the new phone for a mere £136. Our answer was no (although a couple of years ago, we probably would have said yes).

We don’t have insurance on our phones as we couldn’t bring ourselves to pay for it and of course the warranties have now expired. He was about to borrow an old phone from a work colleague to see him through till the end of the contract when he decided to have a go at fixing it himself.

Through the wonderful world of YouTube, he was able to study a video tutorial on how to disassemble the phone and change the trackpad. He ordered the parts he needed through eBay suppliers for just £2.99 and after they arrived, he spent a couple of hours tinkering (and slightly panicking) until his phone was fixed! How very satisfying!

It was the first time the hubby had taken a phone apart, so he was pretty pleased with himself and so was I! It just goes to show that you don’t always need to send off your electronic gadgets off to some expensive refurb place – depending on the problem, you just might be able to save money by fixing things yourself.

There are so many items that break and without thinking, we go out and buy a replacement when in some cases, we could actually have a go at fixing it first. If we can’t fix it ourselves, we could always ask a friend or member of the family with relevant expertise to help. It might just save some cash.

Have you tried to save money by fixing things that are broken?

If you’d like to be kept updated with new posts from A Disease Called Debt, please consider subscribing by email!

Image courtesy of freedigitalphotos.net – Do it Yourself by Grant Cochrane