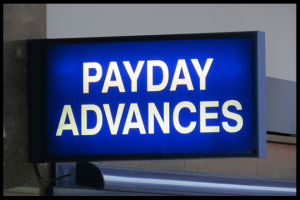 Payday loan. There, I said that dirty word. Hate is a strong word to use, so I’ll say dislike. Yes, this is how I feel about payday loans.

I haven’t had one myself (incredibly, given the extent of our debt!), but I really don’t like anything about them, even without hands on experience. I don’t even like the fact that they are extremely convenient.

In my opinion, payday loans are the very worst kind of debt trap, because they’re so easy to get hold of, but the interest rates are very high, and then there’s some whopping great charges to contend with if you can’t afford to repay a payday loan. I’m with Dave Ramsey when he says that payday loans are a game you’ll never win.

Payday loans are in the media all the time right now not only because so many people are struggling with them (an increase of 42% in the UK compared to last year), but because of the dodgy practices surrounding some lenders. Take Wonga for example, one of the UK’s largest payday lending companies. Wonga was recently investigated for sending out 45,000 fake legal letters from made up law firms in order to chase borrowers for payment.

They were told by the Financial Conduct Authority (FCA) to fork out £2.6m in compensation for customers affected. According to research presented by Citizen’s Advice Scotland (CAS), some other lenders don’t properly assess the borrower’s situation before lending to them (as lenders aren’t required to carry out credit checks), meaning that they may not even know whether the borrower can actually afford to repay the loan.

I really do understand why some people might decide to get a payday loan. Sometimes, there are real emergencies to deal with like huge bills and not enough money left over to pay for food and groceries. At the end of the day, if it’s a choice between literally not being able to eat and keep warm or getting a payday loan to make sure that you can, then of course a payday loan is a better solution.

But there are other reasons why some people choose to get a payday loan when they probably don’t need one and in my opinion, these reasons are just insane!

5 Insane Reasons to Get a Payday Loan:

Anyone looking to to get a payday loan in order to continue their social life until they next get paid is potentially taking a huge risk in getting themselves into financial difficulty. Of course everyone likes to enjoy themselves, there’s nothing wrong with that. But for someone who is finding themselves with little or no money at the end of each month, a payday loan is not the answer for keeping up appearances.

Those big ticket items like a newer car, TV or gadget are all things that some people get payday loans for and ultimately get into further debt for. Whilst it might seem like those type are things are needed, they’re not. Some people might think that needing to pay for a big car repair is enough of a valid reason to get a payday loan, however, I’d urge them to check out other ways of getting hold of some quick cash (like working extra hours or asking a friend for help) before resorting to going down the payday loan route.

One of the worst things about the payday loan trap is the continuous cycle of debt that often occurs. It all starts by not being able to afford to repay a payday loan. The loan can sometimes be ‘rolled over’ to the following month along with a boat load of interest and default fees too. If the loan can’t be repaid the following month, some people turn in desperation to other lenders, to use the money from the new lender to pay back the original lender. Crazy! But I can imagine how quickly a desperate situation like this can arise.

4. For addictions such as cigarettes and alcohol

Addictions are serious, there’s no escaping that fact and anyone with an addiction like this should receive help and support to overcome it. Inevitably, some people will resort to payday loans to fund their addictions. What they probably won’t realise (or care about at that point) is that getting into the payday loan trap because of needing to get money for their next fix will definitely make things worse, because of the financial and emotional stress on top of other issues.

Impulse buying, shopping for fun, splashing the cash etc. is all well and good and I myself have got into debt many times for precisely this crazy reason. But using payday loans for this kind of activity really is madness. Not only is the cash being spent on things that aren’t needed but all that interest on top… it doesn’t bear thinking about.

The bottom line is that anyone looking for a payday loan is probably going to be strapped for cash and they won’t have enough money to do what they need (or want) to do before getting paid again. Some borrowers may have a poor credit history and could be why they’re turning to payday loans rather than traditional loans or credit cards with lower rates of interest.

Payday loans might seem like the perfect solution, but before going down that route, borrowers should check out all the other options available to them first. Such as asking for financial help from friends and family, or trying to earn some extra money to see them through.

If a real emergency is happening, there are food banks like the Trussell Trust here in the UK which can help or the Citizen’s Advice Bureau for information on other sources of financial help. Setting up an emergency fund after everything has calmed down will really help with avoiding financial catastrophes in the future.

What are your thoughts on payday loans? Have you ever had one?