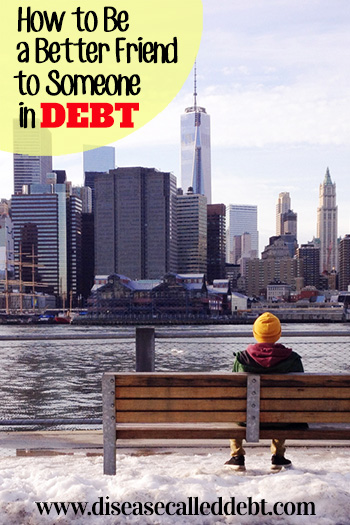 Most people like to think of themselves as being a great friend. But if you have a friend in debt, are you really as good a friend as you can be to them?

If you have a friend going through divorce, a job loss or bereavement, you’d naturally want to do what you could to support them, right?

And vice versa, you’d hope that your friends would surely do the same for you. Friendships are of course a two way thing, involving give and take from both parties.

Those examples above are all major life events that are extremely difficult to deal with. They are the sort of events where you just KNOW that your support and help would be needed.

The thing is that debt can be just as devastating for someone, only in a different way. Unlike divorce, job loss and bereavement though, debt isn’t talked about quite as much.

It’s still very much a taboo subject and if you’ve never struggled with debt yourself, you might not be able to fully appreciate what your friend in debt is going through. This could affect your friendship in the longrun.

When my husband and I were heavily in debt, we found that many of our friends didn’t understand the impact that debt was having on our lives.

After all, we’d managed to rack up over £41K ($62K) of credit card and loan debt between us by spending too much money on things we couldn’t afford – it was kind of hard to fully explain what we were going through, as we were just so embarrassed and down about our finances.

It was like debt somehow became a barrier in the middle of our friendships. We felt frustrated, isolated and like we couldn’t be honest with our friends and on the other hand, our friends just didn’t know what was going on with us.

In case you have a friend who is struggling with debt, there are some things you can do to help them and in turn, keep your friendship running smoothly. If I could turn the clocks back, these are the things I would have tried to talk about with my own friends at that time.

Regular friendships involve going out for dinner, to the cinema, to social events and even on holidays. The thing is that someone in a lot of debt can’t afford to spend money on those things, but they might not be able to see that just yet. Your friend struggling with debt will at some point be hit by the reality that they simply can’t afford to buy the things that they want (and sometimes, things that they need).

At first, your friend may try to carry on as normal but eventually they will have no choice but to rein in their spending. This might be difficult for you on the other side of the relationship as you’ll notice your friend taking a step back from taking part in things that cost money – but they may not be in the right place emotionally to tell you how bad things are.

There are two things you can do here if you want to be a better friend. If your friend starts saying they can’t meet up for nights out anymore or can’t make that weekend away, firstly – you could try to talk to them and ask them what’s wrong. In which case they may tell you what’s going on with their debt. Just let them know you’re there for them, even if you can’t fully understand their situation.

Secondly, as odd as this sounds, try not to keep asking them to do things that cost money. They will probably hate having to saying no to you and doing so will make them feel pretty bad.

2. Spending money on just a coffee can be a big deal for someone in debt

Small expenses can also be a big deal too. When someone is in debt and struggling, just going out for a coffee with a friend can present a hurdle financially. Whilst you might think that you’re just going out for a cheap cup of coffee, for your friend in debt, they may already be thinking about the cost of getting to and from a venue to actually have the aforementioned coffee. Then there’s the cost of the coffee and the added temptation of buying a cake or a sandwich to go with it.

Going out for coffee isn’t a small expense for someone struggling to pay their debts because it all adds up and most importantly – they need their money for debt repayment! Your friend will need to have some kind of social life of course, but whilst they try to get a handle on their debt, it’s worth being aware that even this could be a problem for them.

3. Support not financial help is what people in debt need

If your friend is in debt and you’re desperate to see them and enjoy time with them socially, you might find yourself offering to pay for them to eat out with you, so they can pay you back later. You might just want to offer them money as a gift without them paying you back at all.

You might be surprised to know that financial help and gifts such as this isn’t what people in debt usually need, for the following reasons…

Secondly, your friend in debt needs to find their own solution to their problem, so they can learn about managing their money more effectively. This doesn’t apply to everyone in debt but it’s worth mentioning all the same: if you give your friend money to alleviate their debt problems, all they are learning is that they just received money for free. A lesson learned the hard way will truly help your friend in the long term.

So support your friend emotionally by being there for them – think twice before offering financial help.

4. Be sensitive when it comes to big and expensive purchases

Don’t take this the wrong way, but if you’ve just bought a nice new TV, shiny new car, a new home or have just come back from the most amazing holiday of a lifetime, be sensitive when talking to your friend in debt about it. As much as you’ll quite rightly want to shout your exciting news from the rooftops, it might just hurt your friend.

This is because your friend could start reflecting on how they got into debt and start beating themselves up about their situaton because they can’t be where you are right now. Even worse, your friend might end up going on a spending spree becuase they don’t want to feel like they’re being left behind.

5. A little extra effort from you will be greatly appreciated

A friend in debt is a friend in need, whether they know it or not. If you go the extra mile for them, by visiting them at home and focusing more on actual time spent with them rather than things that cost money, they will remember this for years to come. True friendship is about supporting one another, faithfully and without judging one another.

If your friend is fully aware of their money problems, you can guarantee they’ll be constantly be thinking about all the money mistakes they’ve made before. As much as they’ll probably appreciate helpful advice from you, try not to raise eyebrows or show that you’re shocked at how they got into such a mess. It’s like kicking someone when they’re down and will only make them feel worse.

If you want to be a good friend, support them through the tough times emotionally and when they’re back on the road to financial recovery, feel free to share with them your tips for money management (seeing as it’s something not everyone talks about)!

Not everyone starts off on the right foot when it comes to personal finance. People get into debt for all kinds of reasons! Sometimes it’s through mindless spending and not being careful with money, but it can also be because of financial emergencies, business problems or other circumstances beyond their control.

No matter the reason, everyone who is struggling with debt needs a real friend. One who has their back and whom they can trust not to think badly of them. A true friend in times of need in return will gain a friend for life.

Could you be a better friend to someone in debt? 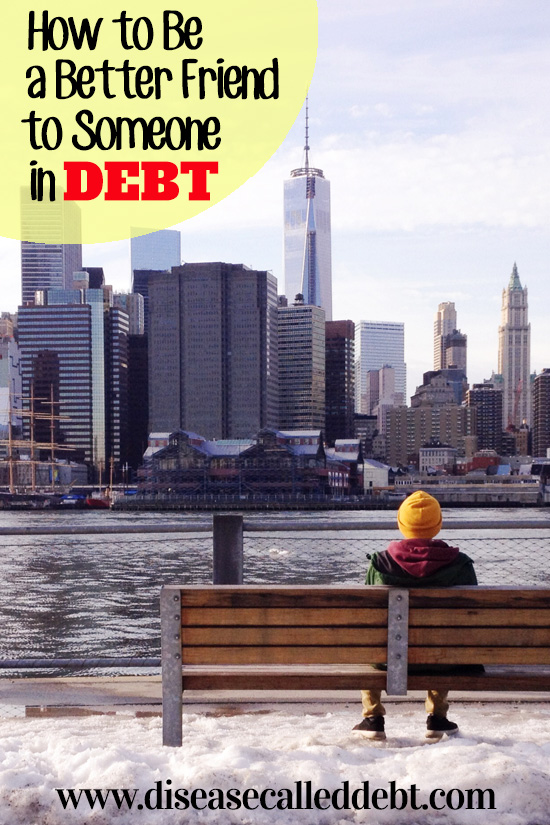