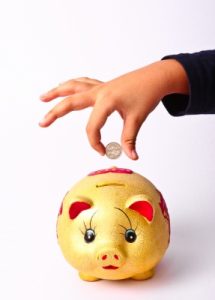 After all the mistakes that both the hubby and I have made with money over the last 15 years or so, we’re determined that our little girl (who I’m going to refer to as ‘G’ from now on) will learn enough about money to know what to do with it when she needs to. So, we’re starting really early with our lessons about money for her.

Lately, I’ve been using a reward system to encourage good behaviour, so whenever G is being good (like eating all her veggies at dinner time or going to bed without fuss at bedtime), she gets a sticker. Thank goodness for stickers because they really do make her world go around!

Anyway, G has shown an interest in money for a while now, so I’ve been letting her handle coins frequently and she always pays the shop assistant which she really loves doing. We have this little game going on where Mummy gets to keep the silver coins and she gets to keep the brown ones. Daddy sometimes gets to keep the gold coins but not all that often. 🙂

G has been asking questions about why Mummy and Daddy work and why do we have to pay for ‘things’ that we buy at the shops. I’ve been trying to explain to G that Mummy and Daddy go to work to earn money and with that money we have to buy items like food or other things that we need. When we go out to the shops, we talk about how much money we have with us and what we’re going buy with it.

A few days ago, after noticing that G had made her bed all by herself, I praised her and explained that she’d really helped me by saving me a job. She laughed and said that making the bed was her ‘work’. So I told her that every time she helped me or her Daddy, I would pay her for her ‘good work’. I went on to say that this isn’t the same kind of reward as for good behaviour (although this does help nicely), but rather when she carries out a task around the house, she’ll get paid for ‘earning’ money. Payment would be silver coins (i.e. 5p per job well done).

Well, I don’t think I’ve seen her face light up as much as this since last Christmas! She seemed to love the idea of doing some ‘work’ to get these little silver coins which she has told me she’d like to spend at the toy shop once she’s saved enough money up! Since our negotiation, she’s been tidying her playroom, helping me unpack the food shopping and unloading the dishwasher (not the cutlery).

A little bit of appropriate responsibility seems to make her feel really grown up! I think this might be a good way to teach her some very basic knowledge about how money comes about and what you can do with it.

What do you think? Is earning money from a young age a good idea?