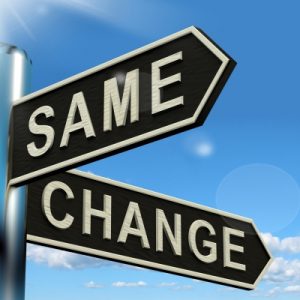 Back in January of this year, the hubby and I began facing up to debt at last. We resolved to pay it back and this time get rid of it for good. We’d tried several times before to pay back our debt with varying degrees of success but eventually, we racked it back up time after time for one reason or another.

This time everything feels different though and I’ve been thinking about what triggered this journey to debt freedom. It boils down to a conversation we had about our finances which effectively changed the way we view and manage our debt.

Me: “I’ve been thinking about the debts.”

Me: “I just feel so fed up worrying about money. Everything is so tight financially, I feel like I can’t breathe sometimes. We need to pay these debts off once and for all!”

Hubby: “I feel like that too. But we are paying off the debts! We’re chipping away at them but at the end of the day, we can only pay off what we can pay off. We can’t magic up some extra money from thin air.”

Me: “I know. But I’ve been reading some stuff online and I came across this article by this guy Keith Rawlinson. Here take a look! He describes something called a debt ladder. You start by paying the smallest debt off then once that debt has gone, you use that old payment to pay extra off the next debt. It’s called a snowball approach or something. This other guy Dave Ramsey also says it’s the way forward.”

(Hands over a stapled document to the hubby. Note – I now know that Keith Rawlinson was in fact referring to Dave Ramsey’s approach in the article I read. But at that time, I hadn’t heard of Dave Ramsey or the snowball method!)

Hubby: “Yeah… looks interesting, I can see the logic behind it. But just paying off our small debts is hard enough anyway! I think we shouldn’t build up our hopes too much but just do as much as we can to earn extra income to pay off our debts and see where that takes us. Who’s to say these guys aren’t making this stuff up anyway? Those success stories all sound too good to be true. Do these people take into account financial issues that crop up everyday, you know like car repairs or unexpected bills?”

Me: “Yes! They talk about putting an emergency fund together for unexpected bills and whatnot. I don’t think they’re making it up – those success stories are down to hard work and commitment, not magic!”

Hubby: “But surely any money we save should be paid off our debts rather than put into an account for emergencies?”

Me: “Well, that’s something we can work out later. But the point is – I think we should aim high. We can do this. I really want to pay my credit card off by the end of this year.”

Hubby: “I would love for that to happen. But in all honesty, I don’t see how? We need to be realistic and I’m just saying not to get our hopes up in case we can’t do that. I don’t want us to be disappointed.”

Me: “Yeaaaah, I know what you’re saying. We just need to take small steps. But we have to try don’t we? Are you with me on this?”

Hubby: “Course I am. I’m still not sure how to even start paying off those small debts any faster than we are doing currently. But if you think we can change things, of course. Let’s go for it.”

This conversation was the starting point for making our debt a priority. Before this we honestly believed that we were doing everything we could to pay off our debts and making even the minimum repayments was really tough going (which it was). There was always the feeling of the debt being ‘too much’, insurmountable and never ending, no matter how hard we tried to change things.

But as we’ve demonstrated to ourselves during this past year, there was room for improvement, for working that bit harder, for becoming more focused. We have no desire to buy anything on credit anymore and we’ve made small but lasting changes to our budget and the way we live our lives. We’re still a long way off as you can see from our last debt repayment update, however, we now know that becoming debt free is not an impossible task! Facing up to debt is the best thing we’ve ever done.

Like anything in life, to achieve our goal we need to work really hard at this. That means not getting bogged down in the wrong mindset, but actually believing in ourselves and the fact that we can succeed.

“Success is not final, failure is not fatal: it is the courage to continue that counts.” Winston Churchill

Can you pinpoint a positive change in your financial situation?

If you’d like to be kept updated with future posts, please consider subscribing by email or RSS to make sure you don’t miss them!