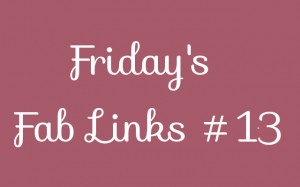 Hi there! Happy Friday. I’ve no idea where this week has gone and I’ve not managed to complete half the jobs on my ‘to do’ list. Next week, I really need to be more productive! I guess I’ve been rather preoccupied with our debt situation this week as the hubby and I had a bit of a ‘wobble’.

It’s nothing to worry about really – no unexpected bills or anything like that – rather we’ve had doubts as to whether we can actually succeed in this mission to pay off our debt in the next few years. Wobbles are a definite side effect I’ve found of the condition ‘debt payoff’. When one of us has a wobble like this (the hubby in this case), it’s up to the other party (moi!) to motivate the ‘wobbly one’ to get us back into the right mindset for what we’re both trying to achieve.

The truth is there is no other option for us – we have to pay back this debt, it’s not like we can just plod along like before so we may as well keep positive about it. But I must admit this wobble affected me a little as I could see where he was reluctantly coming from (more on this in a later post as the whole shebang is too long to explain here). However, I tried not to let him see that I was wobbling too because if we both let our emotions run away with us, that wouldn’t be of any benefit at all.

So in essence, time ran away with me this week and I’ve not been commenting as much as I’d like on other blogs, although I have been trying to read as many as possible still. Next week I’ll be back on form!

Here’s my fab links to my favourite personal finance reads this week:

Michelle from Making Sense of Cents published a great post on What Young Adults Should Know. If I could have told my younger self to read this post and take some advice, I would headed straight on over here! Michelle explores some key areas where young adults often become misguided, such as falling into the trap of buying too much ‘stuff’, rushing to buy a house too soon or basically just not enjoying life for what it is.

Glen at Monster Piggy Bank wrote a helpful article on What is the best way to invest $10,000? I don’t have investments currently because of the whopping debts that we have but I certainly hope to be a position to invest in the future! I found Glen’s advice really helpful because I honestly wouldn’t know where to start investing with that amount of money (or full stop actually).

Done By Forty shared an interesting method on how to stop procrastinating in his post: Do It Now! I have an ever growing ‘to do’ list as mentioned above and really need to be more productive. I’m thinking of giving DB40’s method a try!

Laurie at The Frugal Farmer gave out some great advice in her post: How Skepticism Can Help You Conquer Your Debt. Often we are told something that just isn’t true! For those of us that are in debt, we might see this in action through marketing and media ploys which pull at our beliefs and emotions to try to get us to part with our cash so that we can accumulate the ‘stuff’ that we ‘need’.

Free Money Minute published a guest post by Shaun Spellman on Making a settlement offer with the credit card companies to avoid bankruptcy. This is exactly what my hubby had to do with his creditors a couple of years ago. It can be rather scary when you’re in this position but well worth doing and we ended up getting a debt management company involved to help us manage this process.

As always, I hope you enjoy the above reads! Have a lovely weekend and I’ll be back with a new post on Monday. 🙂