Paying off a substantial amount of debt is difficult, but certainly not impossible. With belief and commitment, you can tackle your debt and get rid of it for good. It’s all about getting into the right mindset and really wanting to be free from debt! The road to debt freedom contains plenty of ups and downs and as well as these, you might find yourself experiencing a rollercoaster ride of emotions along the way.

Every Wednesday for the next 8 weeks, I’ll be writing about some common emotions that go hand in hand with tackling your debt along with some practical advice on how to deal with them. So far, I’ve covered ‘Fear’ and ‘Denial’, so if you missed these, feel free to check them out! 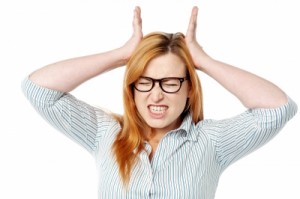 When you find yourself in a great big pile of debt, it’s not uncommon to feel angry and stressed about your situation. Being in debt is very uncomfortable at best and over time, it can really take its toll on our emotions.

Why do we feel angry about our debt and what can we do about this to help us move forwards?

Anger is a very natural, instinctive and powerful emotion that we can feel for many reasons. Being angry could be pinpointed to the feeling of being ‘attacked or threatened’ physically, mentally or verbally.

For example, we might feel angry about a situation at work because the senior management are making cuts in order to save the company money. If our job is on the line, this could cause us to feel threatened, helpless and therefore angry.

We feel anger when we are attacked in some way. Ever had someone insult you either intentionally or not? Or even worse – your child or close family member has been ‘wronged’ somehow. That protective instinct rises up and causes a bubble of anger which just might explode if it’s not dealt with in the right way.

Many of us do something that looking back we regret. How often have you kicked yourself because you wish you hadn’t done it and now you’re living with the consequences?

Why do we feel angry about debt?

Anger in this context is closely linked to debt stress. Being in debt can be very stressful on many levels and getting angry is one way in which we try to cope with the situation. We often have regrets about our debt because the likelihood is that we don’t have many assets to show for it. This regret becomes more prominent as we realise what it will take in terms of financial sacrifices to turn things around.

We feel guilty about how we managed to get into such a financial mess in the first place and often look for reasons as to why this happened to us. The protective instinct kicks in and we start asking questions and looking for somewhere to put the blame.

How did I manage to spend so much on that holiday last year?

Why did the bank lend me money if I couldn’t really afford it? Surely they should have told me ages ago to stop spending!

Why did I have to stretch myself on the mortgage? I should have bought a cheaper house!

If my wife / girlfriend didn’t spend so much on clothes we wouldn’t be in this mess.

We wouldn’t be in all this debt if my husband / boyfriend didn’t always ‘need’ the latest gadgets.

Everybody’s in debt aren’t they, why am I the one who has to suffer?

Once we’ve gotten over the fear and denial stage of being in debt, we want to know how we were so badly ‘wronged’ and who was at fault. We think that there must be a blame element somewhere and we want to look everywhere except at ourselves to start with.

How to stop feeling angry about your debt and move forwards

The bottom line is that it’s no good looking for blame. This way of thinking doesn’t help anyone especially yourself. It’s tempting to blame the banks and credit card companies; after all didn’t they lend you money on a plate whenever you asked for it?

It’s not up to your creditors though to tell you how to manage your debt. They are looking to make money, that’s what they do but at the end of the day, they want their money back. They do give you a kind warning hence that little sentence they put on your credit card statement: “By only making the minimum payment, you are prolonging the length of time it will take you to repay the balance.”

It’s also tempting to blame those closest to you, because they were ‘there’ too and could have intervened, or stopped spending money themselves so as not to tempt you to spend more. Heck some people might have even talked you into spending on your credit card for whatever reason!

Eventually, once you’ve looked for blame elsewhere, you may start blaming yourself (and other people may even be making you feel incredibly guilty about your debts). Whilst it’s important to recognise that – yes you are the one with ultimate responsibility for the debt – it’s also vital to remember that you are the one who can change things. Nobody else.

Don’t lash out at those around you

Have you ever felt that ‘anger bubble’ feeling I described above? The chances are that when you’re facing up to the reality of your debt situation, you’ll have a short fuse for a while until things become calmer.

The amount of time it will take for your anger to subside will depend on how long it takes you to regain control of your debt situation and start making a plan to get back on track. The sooner the better!

If you can, try not to lash out at those you love. Sometimes arguments are good to clear the air, but if this is you feeling angry because you’re kicking yourself about the debts, go for a walk, clear your head and return when you feel calmer.

Being in a lot of debt is a turbulent journey, once which can take a while and those closest to you will be part of that journey, whether they know it or not. Remember that pointing the finger doesn’t get you anywhere. Your time would be better spent looking at ways to make more money or save more money to get you out of debt faster.

Accept your situation and don’t look back

Everyone does something that they regret in life. Even the stranger walking past you on your way to work will have some kind of regret over something. You will probably have regrets over getting into debt in the first place but it’s really important to accept your situation for what it is now and try to improve it.

You can do that by accepting responsibility (not blame). Look ahead into your future and imagine what your life will be like once you’re living debt free. Don’t look back.

Your journey to debt freedom might be short or lengthy. Either way, keeping your spirits up and being positive will really help you along your way. Every time you start to feel angry about your debts, remind yourself that this is just something that is happening to you ‘now’ and it won’t last forever.

Research debt success stories to motivate yourself and spur you on to keep tackling your debt. You could also join debt forums such Money Saving Expert’s debt free wannabe forum where you can find support and encouragement from people in a similar position.

You just need to get through the hard part before you’re well on the way to securing yourself a good financial future. You will be challenged as you work your way out of debt but it will be a really great learning curve at the same time. Imagine how proud of yourself you will be when you achieve debt freedom!

Every time you hit one of your debt payoff goals, celebrate! Start with small goals and aim higher as you go. Reward yourself by doing something you really enjoy once in a while. Then get right back onto that road to debt freedom.

Can you relate to stress and anger caused by being in debt?

If you liked this post, why not consider subscribing by email? You’ll receive a free eBook on The Gift of Debt if you do. 🙂