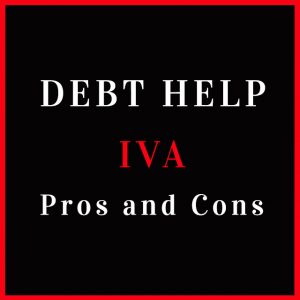 Over the coming months, I’ll be adding debt help articles to this site which I hope will benefit people struggling with debt like us! In this post, I’ll explain the pros and cons of an Individual Voluntary Arrangement (IVA).

Last year, we were contacted by a couple of debt management companies to see whether we’d be interested in an IVA by way of a debt management solution for our own debts.

In the end, we decided not to go ahead with an IVA because we didn’t feel it was right for us. That’s not to say though that other people can’t benefit from an IVA.

What is an IVA?

An IVA is a legally binding agreement between you and your creditors, which normally lasts for 5 years. It’s a type of insolvency – an alternative to personal bankruptcy – so it’s a debt solution that needs to be considered carefully before making a decision about proceeding.

An IVA is arranged by an Insolvency Practitioner (IP) who will liaise with your creditors to set the agreement up on your behalf. Once the IVA is in place, any remaining debt will be written off after the 5 year period has lapsed, sometimes as much as 60%.

The cancellation of any remaining debt might sound tempting, however if you are a homeowner with equity in your property, you may be asked to release a proportion of that equity in order to pay your creditors either at the start or at the end of the 5 year period.

An IVA is subject to certain criteria as follows:

What if you live in Scotland?

As mentioned above, an IVA is available to people living in England, Wales and Northern Ireland, however in Scotland there is a very similar legal agreement available to people struggling with their debts, called a Trust Deed. A Trust Deed is basically the Scottish version of an IVA – very much the same in that it’s a form of insolvency, although it typically lasts for 4 years instead of 5. See Trust Deed Scotland for specific information on what’s involved and who can qualify for one.

How does an IVA work?

Professional impartial advice should always be sought before deciding to go down the IVA route. If you decide that an IVA is right for you, then your finances will be assessed by an IP who will then submit a proposal to your creditors based on what you can afford to pay each month. Your creditors then have to vote in favour of the IVA being set up. If they agree, the IVA will be set up and you will appear on the Individual Insolvency Register.

This is a formal arrangement which once in place means that your creditors can’t pursue you for payments outside of the agreement. It also means that you are legally obliged to keep up your repayments for the next 5 years, so you will need to think about the reality of this before you go ahead. If you don’t keep up with your repayments, you may face bankruptcy and be forced to sell your home.

Your finances will be assessed each year to check that your monthly payment amount is still the most that you can afford. If your financial circumstances were to change (for better or worse), then your IP must be informed immediately. You may be asked to pay more each month if it seems as though you can afford to.

There will be some fees to set up an IVA, one is a Nominee fee for preparing and proposing the IVA to the creditors and the other is a Supervisory fee which will be charged each year the IVA lasts. The fees can amount to several thousand pounds; however these fees are usually added to the monthly payment amount each month.

The list below outlines some IVA Pros and Cons:

Pros of entering into an IVA:

Considerations of entering into an IVA:

If you’re thinking about getting an IVA, then it’s important to seek professional advice from someone who can help you decide whether this debt management solution is right for you. You can contact National Debtline or Step Change, both of which are free to use debt charities in the first instance.

Disclaimer: Any views and opinions expressed on this site are my own. I hope you find this article helpful but please note that this should not be taken as any form of professional financial advice. Whilst careful research has been undertaken when presenting any facts or figures in this article, not all information can be guaranteed as correct and up to date.