I have another great guest post for you today from Richard Greaney who blogs over at DIY Money Mastery. In this post he explains how he dealt with an onslaught of unexpected costs using a clever budgeting and forecasting technique. Please head on over to his blog after you’ve read this post!

Most of us have a story about how we became the financial ace we are today.

It usually begins with a gradual slump, followed by a realisation of hitting rock bottom, then a long and slow process of climbing back to normal again. A great number of people who go through this will tell you that realisation of the magnitude of their debt was their ‘rock bottom’. For me, things were a little different.

My marriage ended at the beginning of 2015, and as they often tell you, separation doesn’t come cheap. But one of the things I’m eternally grateful for is how much that experience taught me about managing money when things are extremely tight.

Usually, when people talk about how they paid off debt, it was a case of realising their debt needed to be paid, then paying it off through some amazing feats in frugal living. In my case, it was quite different.

The first three months after separating consisted of a well-spaced but constant barrage of unexpected costs, many of which were into four figures, that kept coming at me. Some costs continued for six, and even twelve months, leaving me with a total of just over $12,000 of costs that were over and above normal everyday expenses.

Note, this doesn’t include costs like property rates and vehicle registration, which also conveniently showed up right at the beginning when I was broke.

Now, if someone had told me I was to take a pay cut of $12000 after tax for the year, I would have coped. But that wasn’t the way the system was prepared to treat me. Once they had asked for my money, they wanted it now or soon, and in large sums too. The only two payment options I had were cash and my personal credit card.

I couldn’t put any costs onto the mortgage, as is often the case with legal fees when buying or selling a property, as I was dangerously close to borrowing 80% of the value of my house as it was. Higher than that would have cost me dearly through higher interest rates.

So, I worked out, I really needed to manage this all with cash. But how?

I used my “projected balance”

I thought hard about it, and I figured something out – I probably had the money, if you took my salary spread across the year and put it into one lump sum. But as I couldn’t get that, perhaps I could still do some creative accounting with money from my future self?

Not all these massive payments were due at the the same time, so if I paced myself, I could perhaps squeeze through. However, I couldn’t do this without full visibility of not just my present financial situation, but also, my future one.

When you get hit with a bill for $1000 that’s due in a month’s time, there’s at least one and possibly two pays between now and then.

What I could do, I surmised, was first establish exactly when every single credit and debit occurred in my account, as well as the exact amount. Once I knew that, I could then map out a future outlook, incorporating each scary invoice and its due date.

Finally, I could start thinking how I would pay for each. In a sense, I had moved from seeing my pay as a thing that happens every fortnight to seeing it as a chunk of a much larger amount.

But the concept didn’t seem to be in widespread use. I didn’t have time to post on forums and await responses, so decided to do it myself in Excel. I found all my automatic payments, the amount, and the frequency, and entered them in line by line.

Fixed costs were easy. Variable costs required me to set a maximum amount. The important thing was that I could now see every single critical cost for a two fortnightly cycle. Repeat that over and over, and add dates to show the actual day, and you get a projection of how your financial situation will be at any point.

Doing this, I quickly saw that I would be broke until June. “That’s great” I thought. “At least I know now”.

Doing this also opened up some other options I hadn’t considered before. While paying for things on my personal credit card would accumulate interest, this was only the case if the balance was unpaid for too long.

But if I bought something on the credit card with the objective of keeping cash in my bank account to allow me to pay a big bill by its due date, I could then pay down the credit card cost later, but before it started accumulating interest. There’s no way I could have achieved this level of clarity without a future projection.

It’s one thing to limp from payday to payday, transferring everything you save into the greedy arms of someone else (lawyers, tax department, a credit card bill you inherited from the marriage) but another when you know exactly how long it’s going to be for.

Not only did this help me get through the financial fallout of a separation, but by continuing to live this way, I finished the year with a surplus saving of around $5000, and another $2000 to pay for underfloor insulation to be installed in my house.

I now achieve the same outcome using the free app GNUCash, but soon intend to try out the online platform CalendarBudget to see if it’s any simpler to use.

So if you ever face uncertain financial times, you might want to try this method. It helped keep me sane when I needed it most.

Author Bio: Richard Greaney is a laidback kiwi (that’s a New Zealander, not a fruit!) who enjoys writing and sharing his learning experiences with others. He has been an IT commentator, aviation photographer, freelance aviation journalist, and in more recent times, a blogger sharing his own journey of taking control of his finances. He believes there’s no secret to understanding money and running a profitable life. It’s all about being ready and willing to learn and master new skills, and to let go of beliefs holding you back from doing so. Read more about Richard at his site: DIY Money Mastery. 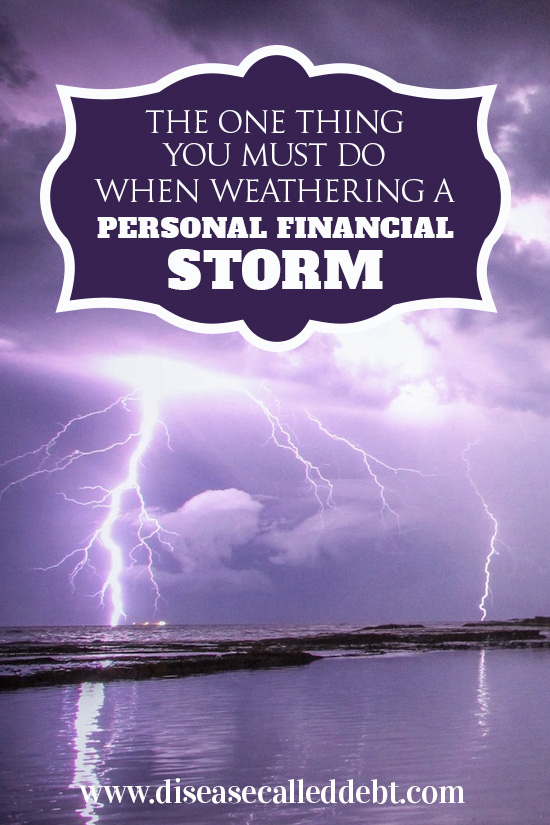