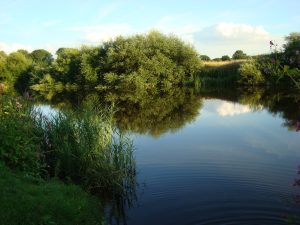 The river near to our home.

Lately, I’ve been consumed with debt stuff. Not consumed in a terrible, depressing sort of way but rather it’s been at the front of my mind in a productive but slightly obsessive way.

At work and at home, my mind has been often been wandering, thinking about ways that I can save money, ways that I can earn money, anything really to keep bringing those numbers down. The lack of time factor has been bugging me and I keep wishing for more hours in the day so that I can focus on tackling the debt stuff.

This really has kept my thoughts busy of late and I don’t mind that, although at times I think my head will explode with all the thoughts that are swimming around in it.

The other day though, something happened that halted my all-consuming thoughts about money matters.

My little girl and I were taking our dog for a walk and as it’s been so hot here in England lately (if you can believe that), we decided to take him for a dip in the nearby river. We’ve done this most evenings for the last couple of weeks. My daughter who is nearly three years old wanted to take her balance bike with her as usual and so off we went.

We walked our normal route down to the little jetty, with my little girl just behind me on her bike. Usually, she gets off her bike at the top of the jetty and we walk down to the river holding hands. We never go right down to the water as I’m always afraid of her falling in. But before I could even shout out her name (or think a conscious thought at all), she whizzed past me on her bike, faster than I’d ever seen her go before, straight down the jetty. She hit the water whilst on the bike causing an almighty splash before somersaulting head first into the river.

Balance bikes are designed to help children learn to ride a bike without pedals or stabilisers. Great idea! Except that they don’t have pedals or brakes. So my little angel couldn’t stop herself and it happened so fast that I couldn’t stop her either. She can’t swim even a stoke!

She ended up about three metres into the river. It’s probably not that deep there but further out, it certainly is deep as boats travel this river every day. It’s also fast flowing as it leads to a large weir.

I jumped in there after her but slipped on the jetty so I went straight under myself. By the time I grabbed her foot which was the closest part of her that I could reach, she was face down and starting to sink into the murky waters.

I managed to regain my balance and grasped her arm at that point to pull her above the water and back onto the jetty. Luckily, my little girl was fine apart from the shock and she was more concerned about the fact that her clothes were wet through. The only dry one was the dog who had stood on the bank out of the way! We sat there on the bank for a good 10 minutes to try to calm ourselves down before walking home drenched.

Amazingly, my phone and house key which were in one of my pockets survived the whole thing. The Blackberry is such a good robust phone!

On a more serious note, it was honestly the most frightening thing that’s ever happened to me in my life so far, particularly as I was on my own, with nobody else around us and my hubby was working away to make matters worse. If anything happened to my daughter, I don’t know what I would do.

She is my life, she is the most important thing to me and what I live for. Everything I do is for her, including being a little obsessive about tackling our debt situation, because I want to make sure that she won’t ever be affected by debt and I want to educate her to not make the same mistakes that we did.

It did give me a little perspective

Sometimes, what we’re passionate about such as work, careers, making money or paying off debts can seem like the most important things in the world. Yeah – tackling the debt stuff is very important for our family if we want a better life for ourselves and our child but we mustn’t lose sight of what is really important in our lives. Like family, friends and the times we spend with our loved ones. Money (or lack of it) will always be there tomorrow.

Note to self – I must make sure we include a budget for swimming lessons in the near future. 🙂

Has anything happened in your life to make you sit back and gain a little perspective?