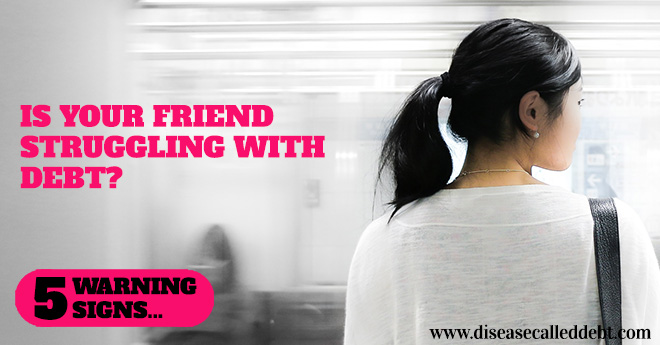 A while back, I wrote a post called “How to be a better friend to someone in debt” – about how a friend in debt is a friend in need, whether they know it themselves or not. It prompted quite a few responses and was even featured on Rockstar Finance last week!

One of the comments that came in was about how we (as the person trying to help) may have to do some detective work to find out if our friend might be struggling with money, so that we can support them. This resonated with me because my husband and I managed to hide the fact that we were struggling with debt from our own friends for a long time.

There were a couple of reasons why. The first was that we were really ashamed of how we’d managed to get ourselves into such a mess in the first place. And the second was that we didn’t think our friends would understand and we thought they would think badly of us.

If we had been a bit more upfront about our debt back then, we may have been surprised to find our friends supporting us or even confiding in us that they too had experienced financial difficulty in the past. It might just have made things easier.

Looking back, we displayed some behaviours that were indicative of money worries and I’ve outlined them in this post below. So if you’re worried about a friend struggling with debt, consider these classic warning signs. You might be able to identify a problem and help your friend when they need your support the most.

1. Avoidance when it comes to spending money

If you find your friend is starting to cancel on you when you’ve planned to meet up for dinner, drinks out or even just a coffee, it might be because your friend can’t afford it. Rather than being honest about money problems, it is easier to just cancel with any other excuse rather than the truth.

If it’s happened once, don’t worry too much. But if you notice a pattern, where your friend is cancelling on meeting up when there will be a cost associated with it, this is when there could be a problem.

2. Using public transport rather than the car

Cars are expensive, when you take into account fuel, tax, insurance and other random costs like car parking. If you find that your friend has taken to using public transport to get around when they still have a car at home, they may be trying their best to save money. They may have even already sold their car.

There could be a perfectly innocent reason to using public transport – like being more environmentally friendly, which more and more people are striving to do. Only you know your friend and if this is out of character for them, they may well be hiding money worries from you.

I remember doing this myself several times before I gave in and resorted to option number one – general avoidance. I tried to live my life normally, fully aware that I couldn’t afford a night out with friends. So as an interim measure, I met up with friends (using public transport) and stuck to tap water all night whilst they had a few drinks.

I tried two excuses here for only drinking tap water, the first being a very long course of antibiotics and a dislike of soft drinks. The second being that I was on a fad diet that involved no alcohol. After a couple of months, I was fed up of fending off questions and in some cases peer pressure from my friends to just let my hair down for a bit. So I stopped going out altogether.

Debt can put someone under incredible stress. The thought of not being able to pay bills and worrying about debt collectors, if the situation has become extreme, is definitely enough to cause sleepless nights and even depression. Those things alone are easy to hide, at least for a while.

But weight loss? It’s a physical symptom that’s obvious to see. If someone really doesn’t need to lose weight, this is a sign that something is wrong. It could be down to illness or depression, or when combined with some of the other signs above – money worries.

If you notice a bunch of unopened bills when you visit your friend at home, this is another classic warning sign of money troubles. Unopened bills is a clear indicator that the recipient doesn’t want to see what’s inside. If your friend hasn’t opened letters from a credit card company or bank, it could be because they suspect they are defaulting on debt payments and they don’t want to (or are too afraid to) deal with the consequences.

Denial is one of the first stages many people go through just before they’re forced to face up to their debt problems one way or another.

Debt is tricky to talk about – it’s probably not wise to just ask your friend outright, “Are you worried about debt?” If you put them on the spot, you may not get an honest answer. The best way for your friend to feel that they can confide in you is if they think they can trust you and that you won’t judge them for whatever mistakes they’ve made.

Try spending more time with your friend in a place where they can relax and not have to spend money. See if you can pick up any other warning signs by asking a few open ended questions. Be forthcoming about your own experiences about financial difficulty, if you have any.

If it turns out your friend is struggling with debt, be sensitive and avoid talking about your financial successes – for now at least. You may want to inspire your friend that they can build wealth themselves, but there will be plenty of time for that later, when your friend can see past their debt problems and is on the road to financial recovery. Don’t forget to check out this post which explains exactly what you can do to support them.

Are there any other signs you can think of that indicate money worries? 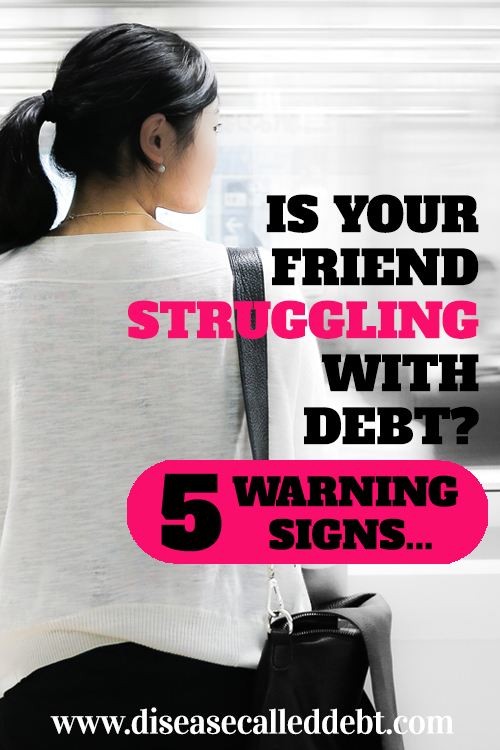