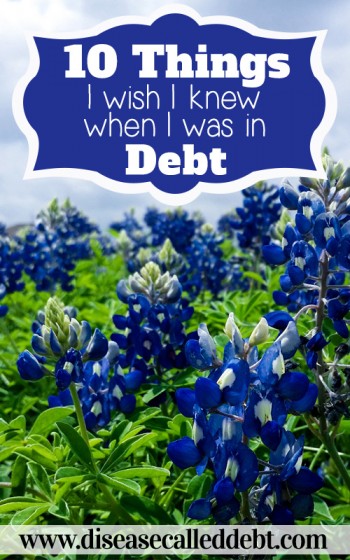 I’ve been thinking back to not so long ago when we were heavily in debt, particularly about the things I know now that I wished I’d known back then.

In this post, I’ve listed 10 things I wish I’d known during the height of our debt. If you’re currently struggling with debt, I hope this post is of some help to you!

For a very long time, the hubby and I lived with a lot of guilt and embarrassment about the fact that we had so much debt.

There wasn’t a day that went by when I personally didn’t think about this and I remember worrying so much about what people would think of us both if they knew the state of our finances.

I looked at other people as if they were on a completely different level to me – better in some way – more knowledgeable about money related matters.

Debt gave us a low opinion of ourselves. It was only when I started this blog that I realised that lots of people have some kind of debt. It’s just that most people don’t talk about it! They might well be thinking about their debt everyday just like I did with ours, but because debt is still very much a taboo subject, we wouldn’t necessarily know.

The bottom line is – tons of people are in debt. Many people are in serious, life changing debt. It’s nothing to be embarrassed or feel guilty about because there is always of way out of debt. And that brings me onto my next point…

2. Getting out of debt would take less time than I thought

The hubby and I lived uncomfortably with our debt for 15 years before we finally became debt free. At one point, I thought we’d never be rid of it because I just couldn’t see a way out. The hubby had took a huge salary cut, my wages weren’t great because I was working part time around my daughter, and on the face of things, it didn’t look good. Our debt management company said as much. Even our own bank advised us to go bankrupt.

We paid off £41K in 22 months, after being in debt for 15 years. How? Well to cut a long story short, we worked extremely hard, raised a lot of extra cash through side jobs and PPI refunds and in addition, we stripped our spending back to the bare minimum. We wore pretty much the same clothes during that time, ate the same foods from a meal plan and managed just fine without cable TV.

Our debt management plan was supposed to last 10 years at least. For the first two years, we abided by our debt management plan, making those minimum payments on it as best we could. Once we started raising more cash, we were able to pay lump sums off and even negotiate some full and final settlement offers to reduce our debt some more.

So, we realised this fact on our own – just because we were in a debt management plan, that didn’t mean we had to sit back and accept a life in debt for 10 years plus.

4. Going without would be so worth it

We made a lot of financial sacrifices during the time we were trying to get out of debt. We rarely bought new clothes – and by new, I mean secondhand – new to us. We lived with the same wardrobe during that time, replacing buttons here and there. We fixed things that broke. We still live without an expensive TV package even now we’re debt free. Those little sacrifices helped us to get out of debt faster. They were totally worth it!

5. There are tons of ways to make money other than selling on eBay

For a long time, I hunted for things to sell on eBay and at car boot sales. I’d exhausted pretty much anything worth selling. Then I discovered other ways to make money using the skills I had. You can read some of them in one of my eBooks, 101 Ways to Make Money from Home, if you’re interested. 🙂

6. Getting out of debt would only be possible if we made the effort

If we’d have known it would take 22 months to be free of £41K’s worth of debt, we’d have done it YEARS ago. If someone had told me that would be the case, I wouldn’t have believed them though. Maybe the timing wasn’t right back then, but we definitely never dreamed it would take less than two years to achieve debt freedom. I guess we had to be in the right place and in the right frame of mind in order to put in the amount of effort it took to get out of debt.

7. Our debt was our own fault

I said earlier about the fact that we felt guilty and embarrassed about our debts for such a long time. Yet even then, we questioned why this was happening to us. Why did our creditors lend us so much money over the years? It was practically handed to us on a plate!

Once we made the connection that our debt occurred because of the way we handled our finances and how we reacted to life changes, we realised that only we ourselves could get us out of debt. By life changes, one example I’m thinking of is when my hubby lost his job. We carried on living pretty much as we did when he had a great job instead of making cutbacks and getting some savings in place. We didn’t worry back then and this alone led to us really struggling later on in life.

8. A financial miracle wasn’t going to happen (for us)

I kid you not, I dreamed of winning the lottery every morning whilst driving to work. By the time I’d arrived at work, I’d already decided how to spend it in my mind. I’d buy my parents and other family members a house and then we’d get a little place of our own. The first thing we’d do is phone up our creditors and get the debts paid off. It was nothing more than a dream and the sooner I stopped waiting around hoping for a financial miracle, the sooner I would have got on with the task I needed to do.

9. Being in debt has a silver lining

I never, ever, thought anything good could come of debt. But truly, there are positives to be taken from being in debt. For me personally, I’ve learned about managing money, budgeting and self-control. In addition, our debts have given me a multitude of job opportunities which all stem from this very blog.

I briefly mentioned earlier about the fact that our debts caused us to have a low opinion of ourselves. We felt lower than low many times and often lived in fear of phone calls from creditors and baliffs knocking on our door. We couldn’t bear to look at our mail in case we saw more interest charges on a credit card statement. We didn’t even check our bank account (not recommended!) because it made us feel so much worse looking at the state of our overdraft.

This fear that we were living in became much more prominent after our daughter was born. I kicked myself repeatedly for all the mistakes we’d made previously, because we’d put her quality of life at risk. That might sound extreme but it’s how I felt back then.

After I started this blog and read more and more information about debt, I realised that everyone in debt has rights, including us. There are such things as priority debts and non-priority debts and providing we weren’t falling behind on priority debts, like a mortgage or rent for example, then our home would be safe.

As for non-priority debts (these are the likes of credit cards and loans) which is what our debt consisted of, as long we communicated with our creditors to arrange a payment that we could afford, things would be ok. So even though we were getting chasing phone calls from creditors that frightened the life out of us, all we would have had to say (and prove) was that we could only afford to give them X amount per month.

Getting out of debt is absolutely possible, providing you knuckle down and do what it takes to get it paid off. That will mean making some lifestyle changes and taking a different view on money altogether.

There is a wealth of information on the internet to help you kick off your journey to debt freedom. As a starting point, check out the debt section of this blog and perhaps read a couple of great personal finance books like Dave Ramsey’s “The Total Money Makeover”

and Thomas J Stanley’s “The Millionaire Next Door”

*Affiliate links to books I highly recommend are contained in this post. Disease Called Debt is a participant in the Amazon Services LLC Associates Program, an affiliate advertising program designed to provide a means for sites to earn advertising fees by advertising and linking to amazon.com. 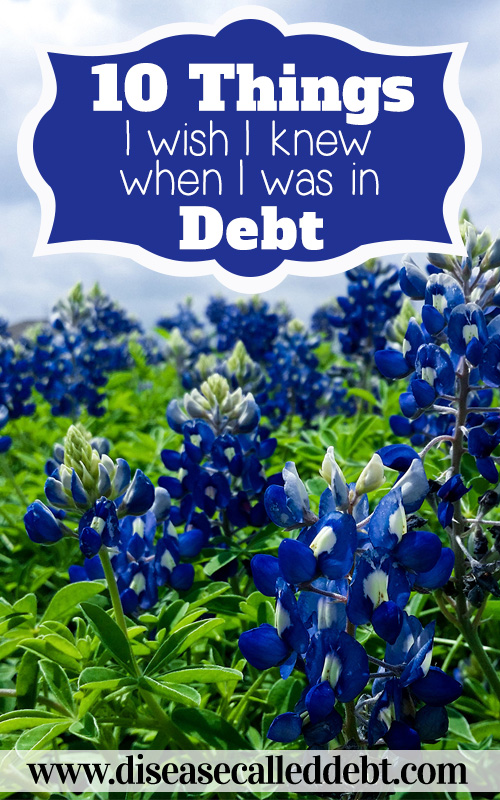